The Fresh Prince And New Heir 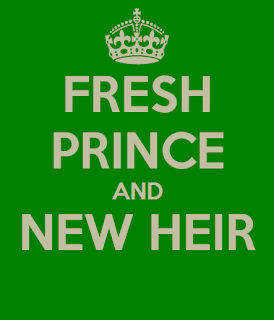 Now this is a story all about how
The monarchy got turned upside down
And I'd like to take a minute, just sit right there
I'll tell you how a newborn became a Prince and an Heir

In posh South London, born in bed
With Kay Burley outside, voice going through my head.
Will 'n' Kate expectin', acting all cool
While Harry was paddlin' in the birthing pool

Kate called for a midwife and when she came near
She said, "Have I smudged my make-up? Fetch me a mirror!
I gotta look my best, this moment is rare.
I'm about to give birth to a Prince and an Heir!"

The announcement came and just like a flood
Onlookers made crazy in the neighbourhood.
Town cryers and reporters with nowt else to say
Repeated the announcement about a Prince and an Heir

The world has gone mental, as it always does
No name has been announced, maybe it should.
Media frenzy with all of its flair
Welcomes the Fresh Prince and our new Heir

They came out of delivery around seven or eight
The hard work had started; just being Mum Kate.
They showed him his Kingdom, he was finally here
A new family member, a Prince and an Heir

Words by Paula Maher and Nickie O'Hara to celebrate the #royalbirth