A Visit To The Guinness World Records HQ

November 05, 2013
When life gives you lemons... the Guinness Book of Records team make you try and catch them blindfolded!

This was just one of the records on offer when we were guests at the Guinness World Records HQ in London during half term. And when they weren't chucking lemons at us, they were making us stick post-it notes on ourselves or making us row upon row of pop party poppers

(These were some of the records that we attempted to break on the day - not just randomness that happens at the GWR Offices although I'm not so sure...)

One of the best moments of the day for Jake was meeting Marco Frigatti. Yes, I hear you say "Who?", just as I did.  As one of the GWR team said, he's the most famous un-famous person ever as the star of the Guinness World Records Smashed show on Sky 1.   Jake was impressed which is the main thing really - click on the pics below to see more of our day. 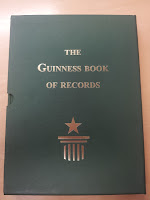 The GWR Team really put on a great day for us and we became part of an impromptu focus group for their Diamond Anniversary book, due for release in 2015, but we are sworn to secrecy. However, here's (a copy of) the first ever Guinness World Records book - a cloth cover with a protective sleeve.


No records were broken this time but I was the winner of sticking the most post-it notes on to myself and I'm thinking of introducing it as an ice-breaker at work meetings with immediate effect.


The Guinness World Records book is an annual favourite in this house and is the first present I buy for my nephews at Christmas.  To have one book that is a joy to read across all generations is a rarity in itself.
Take a sneak peek at the 2014 edition here:
http://www.guinnessworldrecords.com/2014/index.html