Who's The Daddy - My Top Five British TV Dads

June 20, 2015
This Father's Day I thought I'd share something a little bit different, so here are my Top Five (British) TV Dads. There were a few that didn't make the cut (Father Ted Crilley may have been pushing it a bit too) but these five were the ones that came straight to mind.

I grew up on a diet of 1970's comedy and even though I'm not a huge fan of slapstick comedy, Some Mothers Do 'Ave 'Em was one of those that stood out from the crowd. I always remember being quite thankful that Frank wasn't my dad but - and even now I don't know why - I always felt sorry for Frank. He tries so hard to provide for his family but never quite succeeds and will go to all lengths to try and make it work, even though it's totally obvious that it will end in certain disaster. His vulnerability was his downfall and he always seems to be at the nasty end of workplace bullying. Because of this it's now it's hard to watch this type of 'comedy'.

Did you know... the catchphrase "Ooh Betty..." is only said once (Series 2, Episode 2) and that there were only ever twenty episodes made?

I definitely related to the family in 2.4 Children. They reminded me a little bit of my own family (I didn't have a snotty little brother though - I had a weirdo little sister). Whilst the show focused on the mum in the family (Bill), Ben had the ability to relate to both adults and children with a fantastic sense of humour. He ran his own heating repair business (along with his very sarcastic assistant, Christine) and often joined his son to watch horror films and play computer games whilst teasing his teenage and hormonal daughter. Whist being a bit daft, at the end of the day he was always there for his family.

Did you know... there are many post-modern references included in the show including The Flowerpot Men and Monty Python?

We've threatened to buy my husband a yellow striped polo shirt on a number of occasions as we are sure he was the (unofficial) muse for this character. Surveying and commenting on family life from his main vantage point, Jim Royle manages to use up all his energy doing precisely nothing, apart from watching television, slagging his family off and announcing his impeding bowel movements. As has been proven on a number of occasions, he does have a softer side which comes into play when needed.

Did you know... After Noel Gallagher heard that his song, Half The World Away, had been requested for the title track, he suggested that the track Married With Children would have been more appropriate? What the hell does he know, eh?

Ben reminds me a lot of my own dad with is constant need to escape and have a quiet read of the paper with a beer after a hard day's work. He's sometimes fairly surly and ill-tempered - and not just with his family as this extends to almost every single person he meets. However, when all's said and done, he's pretty much a caring and providing father and a sensitive and supportive husband.

Did you know... My Family is one of only twelve British sitcoms to pass the 100 episode mark (120 episodes have been made)? I've also got Robert Lindsey as one of my 'Shwing' members *ahem*

Oh, where to start with Frank. He's an alcoholic who is forever skint and on the fiddle or borrow for cash, not so that he can feed his family but so that he can buy more beer or drugs. He always has a very perceptive opinion on what is happening in the world, especially with what affects him and his community. In fact, he'd probably make a great politician. After living in a similar environment to the Chatsworth Estate for many years, I can honestly say that I know a few Frank Gallaghers...

So who are your Top TV Dads. I stuck with British but I'll let you nominate anyone. You can have any nationality, past or present, fact or fiction. Go for it! 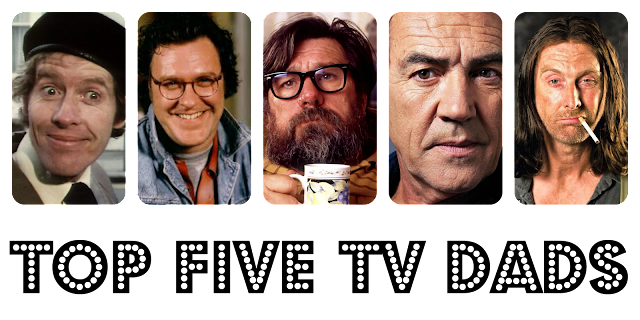 In the interest of transparency, I have entered this article into a competition with Currys PC World