April 21, 2016
Many times I have wondered how people can find themselves so emotionally involved with a 'celebrity' that they participate in public grieving on social media channels.  I often think it is so that they can 'be seen to care' or to join in with a trend.  I usually comment on the passing, sometimes share a relevant news article and then wait until the next Deadpool newsletter. 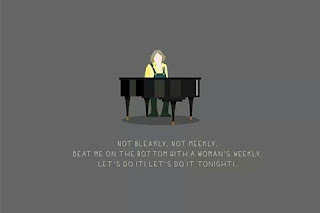 Hearing about the sudden and shocking passing of Victoria Wood was different.  I immediately understood why people feel the need to communicate their grief. And why they feel so completely and utterly bereft.

Victoria Wood is someone who's comedic genius I have grown up with. Even before I was old enough to understand her observational humour, I remember her appearing on our family television. Then slowly, and surely, some of the jokes felt as though they made sense - the Northern intention, the strong women used in her sketches... but just the way in which she managed to cover almost every single subject using music and humour and very little swearing.  My mum used to email me Victoria Wood clips and quotes and scripts to cheer me up when she knew I was having a bit of rough week.

I can't pick an absolute favourite sketch or song as there are so many to choose from. Acorn Antiques will always be one of the most ingenious "continuing drama series" that has ever been created and everyone loves The Ballad Of Barry And Freda. I occasionally revisit her sketch series, As Seen On TV and dinnerladies has one of the most connected scripts I've ever seen on a "comedy drama". I never tire of watching any of her stand-up shows whether they are as old as An Audience With... or something more recent such as Victoria Wood, Live At The Albert Hall. However, this is one small sketch that has been attributed to the way in which I deliver a stretch session after I've taken my running group out.  The first time someone mentioned it, I cringed but, seriously, it's an honour to even have that accolade.


I have no idea why I felt compelled to write this - there are far better tributes out there - but 2016 feels like the year that the best of the best started depleting and this just tipped me over the edge.