August 09, 2017
I have NO IDEA how I get into these situations but *deep sigh* my friend, Rowena, is very much like the human version of the over-excited puppy part of my brain that thinks some ideas are good ideas but never gets chance to put them into action, thank goodness.  It's a dangerous friendship...

When I was 10 years old a whole school term was taken up on a project with the theme of 'sport'. I wrote off to Grandstand and World of Sport to request signed photographs of presenters to glue into the pages of my folder. To my amazement, Des Lynam, Jimmy Hill, Dickie Davies and Frank Bough wrote back! It was definitely those signed pictures that won me first prize for my project but this was when your Radio 1 Roadshow and supermarket openings were pretty much the only way to catch a glimpse of any famous person, never mind actually get them to sign your autograph book or a publicity photo of themselves.

Since pretty much all of our modern day celebrities are now using social media and appearing in a panto near you, it's fairly easy to grab a selfie with them at a film premiere, a nightclub or even whilst having a 'cheeky Nando's'. That selfie will the do the rounds on Instagram, Facebook and Twitter and then be forgotten about - not even a good story to tell the grandchildren.

Rowena is a bit of a legend in her own lifetime. She has a whole repertoire of stories about her time in the circus (yes, really) and is about to take on the task of becoming a hospital radio DJ. We were recently brainstorming some ideas of how to make our GroupRun Blackburn Celebration Event a bit more fun and during a chat about presenting our alumni with keepsake photos of the volunteers (that idea was sacked off fairly quickly) Rowena came up with the bright idea of 'Celebrity Photo Swap'. 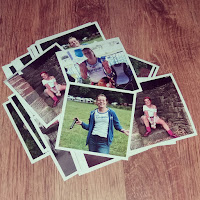 I put Rowena in touch with a great photo company - Cheerz - and she ordered some of their 10cm x 10cm glossy square prints to use as her 'publicity photo'. We then drew up the very simple rules:


Coincidentally, the pictures arrived the very same day that 80s heartthrob, Nathan Moore from boy band, Brother Beyond, was due to appear at a local hostelry so I sent a cheeky little tweet out...

@iamNathanMoore I hear you're at The Havelock in Blackburn tonight. Would you be up for a game of #CelebrityPhotoSwap with @RowenaFDoherty?
— N I C K I E (@nickieohara) July 29, 2017 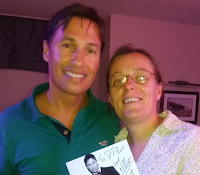 I received no direct reply but *** DRUM ROLL *** later that evening, Rowena sidled up to Nathan, proffered her photograph and he agreed to play along.  There is video evidence of this happening however we are having tech issues... but the bar had been set!

Since then, she has approached Tom Binns/Ivan Brackenbury (see Hospital People on the BBC iPlayer or catch him at the Edinburgh Fringe) who accepted a photo of Rowena but didn't have one to offer in return so he signed her show ticket.  At Lytham Proms, Olly Murs was the next target but he was hiding in his dressing room a bit preoccupied and this weekend she's off to watch a recording of The Jeremy Kyle Show so the challenge is on to see if she can get Jezza on board... and if not, maybe Steve, his bodyguard?

Do you fancy playing along?  You've already got the rules so get some digital printing done for your cheeky publicity shots, invest in a Sharpie and share your efforts using the hashtag #celebrityphotoswap on Twitter (it's just me and Rowena on there at the moment bothering random celebrities, so don't be disheartened).