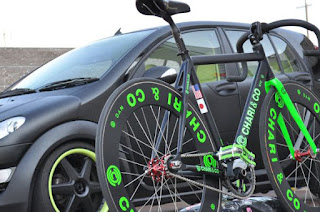 Yesterday I had a heartstopping moment.  One of those 'blink of an eye' moments where you are never sure what happened.

I work on a business park that is a collection of small roads, small brick buildings full of offices, large warehouses that function as storage and factories and there are hundreds of businesses on the site.  There is a speed limit of 15 miles per hour on the site and road markings are clear, especially when approaching the road that cuts through the middle of the site.  The site sits between two towns and many locals use it as a cut-through between the towns and there is a cycle path/footpath (it runs parallel to the main road and cuts across the side roads) due to the sheer volume of heavy plant traffic arriving on the site.  I had to leave the office to attend a meeting yesterday; nothing unusual - I drove from my parking space to the edge of the site.

I pulled up to the junction (a side road, leading onto the main road through the middle of the estate), glanced round, saw nothing coming and started to pull away from the junction.  Within a split second something caught the corner of my eye, I heard a bump, a crash and, as I turned my head, I saw a bicycle and body on the floor.  He had caught the bumper or back wheel of my car.

I stopped.  I threw myself out of my car and over to the cyclist.  It was a boy, probably the same age as my middle child - 18.  He was starting to stand up and I encouraged him not to.  He begged me to check his bike and I was more concerned about him.  He kept apologising, saying that he had to get to such and such a place really quickly.  I helped him up, he appeared only to have a grazed knee.  He checked the wheels on his bike (which spun freely) and jumped straight back on his bike, even though he was wincing in pain a bit.  I offered to give him my name and address and I offered to take call an ambulance.  He refused both and rode off and I watched him disappear down the road.  I still can't believe that no-one else was about to witness this on such a busy business park.

I keep wondering how it happened.  I can never say for sure that he wasn't there when I pulled up to the junction but I'll let you decide.  Here's a diagram of the site (apologies for the crude drawing - but click it to enlarge it) and the position of my car... 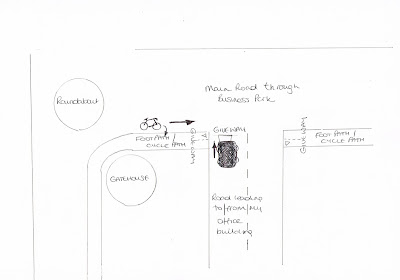 He wasn't wearing a helmet.  He was wearing thin knee-length shorts. He was wearing a t-shirt.  I know it was a warm day and I've heard that cycle helmets can [sometimes] cause more damage that protection and I don't want to apportion blame but, as a car driver, I'm totally aware of the responsibility I have for my big metal box on wheels and how much larger and harder it is than the fragile human body on a metal frame balanced on two thin wheels.  I also know that when I got knocked over when I was 16 by a motorist accelerating out of a side street, I was sent sprawling across the road, I got knocked out and was blue lighted to hospital but I escaped with a grazed face and a grazed knee.  But that doesn't take away some of the responsibility I had when stepping out onto the road in a non-designated crossing area.

Which begs me to ask the question:
Who is responsible for on-road safety?  The driver or the cyclist?  Or is responsibility equally apportioned?