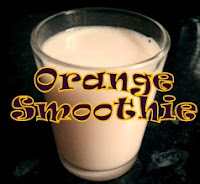 Sticking to my ethos of attempting recipes and making mistakes so that you don't have to, today's "recipe" is Orange Smoothie.  Now, bearing in mind that I cleaned the kitchen from top to bottom today and found a blender that I forgot I had, this was just a "chuck in what I think is supposed to go in" attempt at a smoothie. 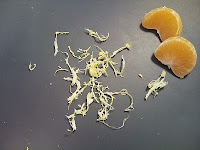 *  If you used orange pieces instead of orange juice then your first glass of orange smoothie will be spat out and given back to you.  You will then have to strain the smoothie so that all the pith and skin is taken out of it. If you live in this household you won't own a sieve so you will have to rely on the good old tea strainer method that served you well when making ginger cake.  You will also forget which tea strainer (for there are two) was last used to extract the goldfish from their tank last time you cleaned them out.  But what people don't know doesn't hurt them, right?  And everything was washed properly...

**  If you are using a new blender, like me, try to remember where you put the instructions because you'll not be able to work out why the on/off/pulse button doesn't work until you lock the jug into place properly.