A couple of magazines, a bottle of wine and a bar of chocolate?
A few books for your Kindle?
A couple of CDs or Blu Ray movies?
A "Keep Calm And Rape Me" t-shirt? 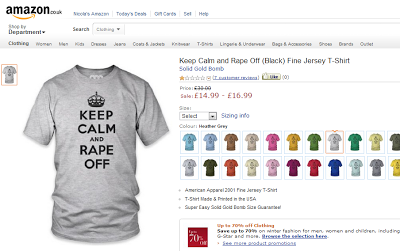 Oh yes, that's an available option on the Amazon UK site, at the time of writing, in a choice of colours and varying tones (rape me, rape off, rape them, rape us, rape a lot), natch....

As I sit here, poised as "Outraged of Blackburn", it's obvious I'm not the only person who is gobsmacked at this.  The link is being shared across social media networks and people are emailing the Amazon UK Chief Executive (Christopher North : cnorth@amazon.com) to complain albeit the individual retailer, Solid Gold Bomb, is equally as guilty as far as I'm concerned because of a breach of seller terms and conditions.  At what point of their sale process (idea, design, creation, printing, stocking, marketing) did they think this was a good idea?

Rape isn't funny.  It's not something that should be made light of in the 'novelty' section of a leading online retail store.

THE ITEMS HAVE NOW BEEN REMOVED FROM AMAZON AND AN APOLOGY HAS BEEN PUBLISHED BY THE MANUFACTURERS. However a "Keep Calm And Hit Her" T-shirt remained on the Amazon UK website for a further twelve hours. 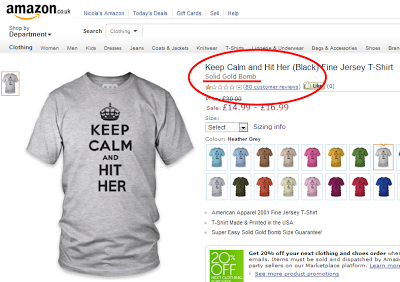 It has just been suggested on my Facebook status that this could also have been "some chancer trying to make a quick buck out of mindless frat boy humour".   My immediate response to that was that the reason I make a stand and shout as loud as I can when I see something like this is not to jump on some social media "Power to the People" bandwagon but more that I don't EVER want my children to believe that this is OK and/or can be made into a joke.  I am the only example they have.  I am their teacher and I want to give them the tools so they can make the best decision they can.