Household Chores - Who Does Them In Your House?


Today Ryan is taking over the blog.  He has chosen an interesting subject, especially as I live in a house where my husband and I swapped 'traditional' roles a few years ago.  Feel free to share your thoughts at the end in the comments. 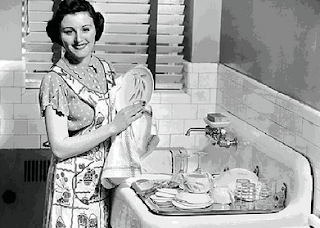 We've got a pretty old fashioned set-up in our household. I work and my partner looks after the home.  It’s not intentional, I’m just not there during the day time to do all of the chores. My partner does most (all) of the cooking too, plus a lot of other things that, if I’m honest, I've taken for granted for a long time.

The reason this post has come about is because last night I actually cooked for the first time in ages and the genuine shock that it caused my partner got me thinking… ‘I really am taking the mick here, aren't I.’  Sure, I’m a bit tired from a day at the office and I don’t get back until after six, but still, I shouldn't only be cooking once a year.

Then that got me thinking… ‘Is this still standard of a 2013 relationship or am I simply not a man of the 21st century?’ Some 1950's chauvinist even?  I’ll be honest, I’m completely questioning myself here and now I’m worried that I've been a rubbish partner all these years. Simply making money doesn't make you a good husband, after all.  I’m questioning every aspect of my home life. Even things like making the bed in the morning or taking my empty coffee mug through to the kitchen.  They may seem small, but surely it must annoy Mrs. B at having to clear up after me just as much as our two girls.


So this morning before I left for work, I asked my lovely lady a few questions and asked her to be completely honest with her answers.  I wish I hadn't asked for complete honesty after listening to her answers, but it was a massive eye-opener and may actually make our relationship even stronger if I act upon what she told me. It was a real wake-up call.

Dinner isn't going to make up for eight years of laziness but I’ll be searching all of the daily deals websites for restaurant vouchers tonight. It’s a start at least!  I’m trying to uncover whether most relationships in 2013 still have this whole husband at work, wife at home set-up and if I’m in a minority of men that simply don’t do much to help out around the house. As Kyla has touched on before in a guest post here on Typecast, some husbands, almost definitely including myself, may be less useful than a Filofax!

The answers below are pretty much word-for-word from my wife’s mouth. I also asked her to rate me out of 10 for each aspect.  I’m going to do more around the home now regardless, but I’d still love to hear about how your partner matches up to my rubbishness or how you rate yourself out of 10 for each of the following questions. Be honest!

Do I help enough…

0/10: “If you’re talking about hoovering and dusting then no, honey. I've only seen you pick up the hoover maybe three times in eight years.”

2/10: “Don’t take this the wrong way, but the best way you can help is by staying out of the kitchen altogether. Every time you do anything in the kitchen you make a mess and I have to clean it up because you don’t clean anything up properly. At least you try to clean up sometimes though, so I can’t give you a zero.”

Q3. … with keeping the bedroom tidy?

2/10: “I remember you making the bed a few months ago, but that was way before Christmas. I don’t think you've ever changed the sheets, you might have helped me once or twice though. There’s always, always, always a glass on your bedside table, which always looks a mess with paperwork anyway so I suppose that doesn't make a difference. You always try to kick your clothes under the bed rather than putting them in the washing basket. Are you sure you want me to go on?”

Disclaimer: The washing basket is all the way downstairs.

5/10: “When you do eventually get round to fixing things – like the cutlery draw which fell off months ago – you do actually do a good job. But it takes you six months to get round to it so I can’t give you a high score.”

3/10: “Very occasionally you hang the washing out to dry. But did you realise that there are other steps involved in those clothes ending up in your draw? I honestly never remember you putting a load of washing in or ironing or folding the clothes and putting them away. But because you do hang them up every now and again I suppose a three is about right.

2/10: “Ha! Have you ever put your hand down a toilet before? I think you might have cleaned the bath, shower and sink once or twice. You leave all of your dirty clothes on the bathroom floor as well.”

7/10: “You take the dog out every day so I can’t complain about that. I’m not sure if you've ever cleaned out the cat’s litter tray and you definitely haven’t touched the hamster. But I wanted the cat and the girls wanted the hamster so I suppose that’s fair enough.”

7/10: “You’re good in the garden when you get around to it, but we've had the grass up to our knees a few times before. It looks ok at the moment but that’s only because it’s winter and the grass hardly grows.”

3/10: “I usually do the big shops during the day so that doesn't apply really. We occasionally go at the weekend though and I remember you helped to put everything away last time so three seems about right.”

Q10. … in comparison with your perception of other husbands?

5/10: “I would assume that you’re the average man in terms of housework so I’ll give you a five. You could definitely help out a bit more but I don’t work full-time so what else am I going to do during the day? It’d be good if you could cook more often because you can actually cook when you try and maybe pick up the hoover from time to time and maybe a few other things. But as a dad and a husband you’re awesome so I don’t resent doing the housework.”

After an absolute grilling at least it ended on a nice note! Mrs. B has never outright asked for help with housework and I've kind of played on that – knowing that I should help but if I’m not asked to then I won’t bother.  That doesn't seem particularly fair and I’m going to do my best to help out a bit more. I know it’s taken a few years but its time to finally pull my finger out!

36 out of 100 seems pretty poor in all honesty and I’m hoping that I’m not outscored horrifically by the readers’ partners.  It’d be great to hear your comparisons in the comments box below if you get a spare five minutes and thanks for listening!