Tattoos : Wearing My Identity On My Sleeve

May 22, 2014
Do you judge people by the ink on their skin?  Or where they choose to be tattooed? I used to but I think we entered an era where self-expression became more accepted. For me, being who you are and having a choice as to how that is represented has always been important, whether that be through dress sense, a hairstyle, the placement of jewellery or body modification.

I was reading this BBC News article which questioned why people go back for more tattoos. It houses various theories and opinions about the whys and the wherefores and does cover the subject from many angles. Whilst reading, I considered the inequality of getting tattooed simply because tattoos of the modern Western world were once associated with criminals, sailors, whores and, more recently, cosmetic reasons. I have the most awesome book about the history of tattoos (1000 Tattoos -  recently republished with some images appearing on Buzzfeed) which shows that Tribal inkings dating way back were displayed proudly by both men and women.

My own theory is that the acceptability of tattooing is part of the digital celeb-trend and just as some fans copy the hairstyle or fashion statement of their idol there will be those who want to replicate their hero's style of tattoo. There are also those who don't think further than just getting it done and/or do not consider how an inking is going to look.  Even Rihanna had regrets (and received lots of backlash) after getting a traditional (method and pattern) tribal tattoo then opting to have it covered with another design to 'make it pretty'.

Regardless of why and where you decide to have a tattoo it is always going to be a conversation starter. One of my most popular posts on this blog is the annually updated David Beckham's Tattoos. I started this organic post so that I could see the progression of his skin art (not so I could look at him in his pants) and I genuinely admire the work he's had done.

Ink is permanent and therefore should be treated with respect. When I was 19 I had my first tattoo. My daughter was six weeks old and I chose a rose and heart design on my right ankle.  Quite colourful, no lettering, just my choice to represent my first born child. Why did I have it done? My boyfriend (now husband) had tattoos and I was fascinated by them; the reason for having them, the style of each one and, mainly, the permanency. I needed one of my own.  There was also a tiny bit of rebellion in there too knowing that my family would probably never approve.

Once I'd had my tattoo I knew I was going to have another but I wanted it to be meaningful and be part of me rather than me jumping on a bandwagon that I could see gather speed.

I had my second tattoo about five or six years later. This time it was on my back, near the top of my shoulder; it was a rose with a scroll bearing my husband's name.

The third time I was inked was another fifteen years later and was barbed wire wrapped around my right forearm. Afterwards, I wasn't overly keen on it. I didn't regret it but I felt like it wasn't exactly what I had asked for.  I had it done whilst on holiday in Tunisia and, with hindsight, I should have kept the idea in my head and sought out a local tattooist when I returned home.

Over the next couple of years I decided that I wanted a 'sleeve' - a whole section of my arm covered with tattoos. Don't ask me why... it was just part of me being me and further creating my identity. I considered that it wouldn't be well received in the world of work but figured that if people judge me by the ink on my skin rather than my ability to do a job then it isn't really me who has the issues.

I started off by having a cross and wings as a 'in memorandum' piece and decided to work around that and the existing barbed wire design. I then took my time to collect some images based around personal thoughts and reasons to create a collective piece for my arm. I wanted no colour and knew that I wanted the gaps filled in with shading. My tattooist drew up each design, let me preview and adjust them and helped me decide on placement. The finished piece has generated various reactions from the pursed lips to the single raised eyebrow, a lean in for closer inspection and the comment, "Cool ink!". 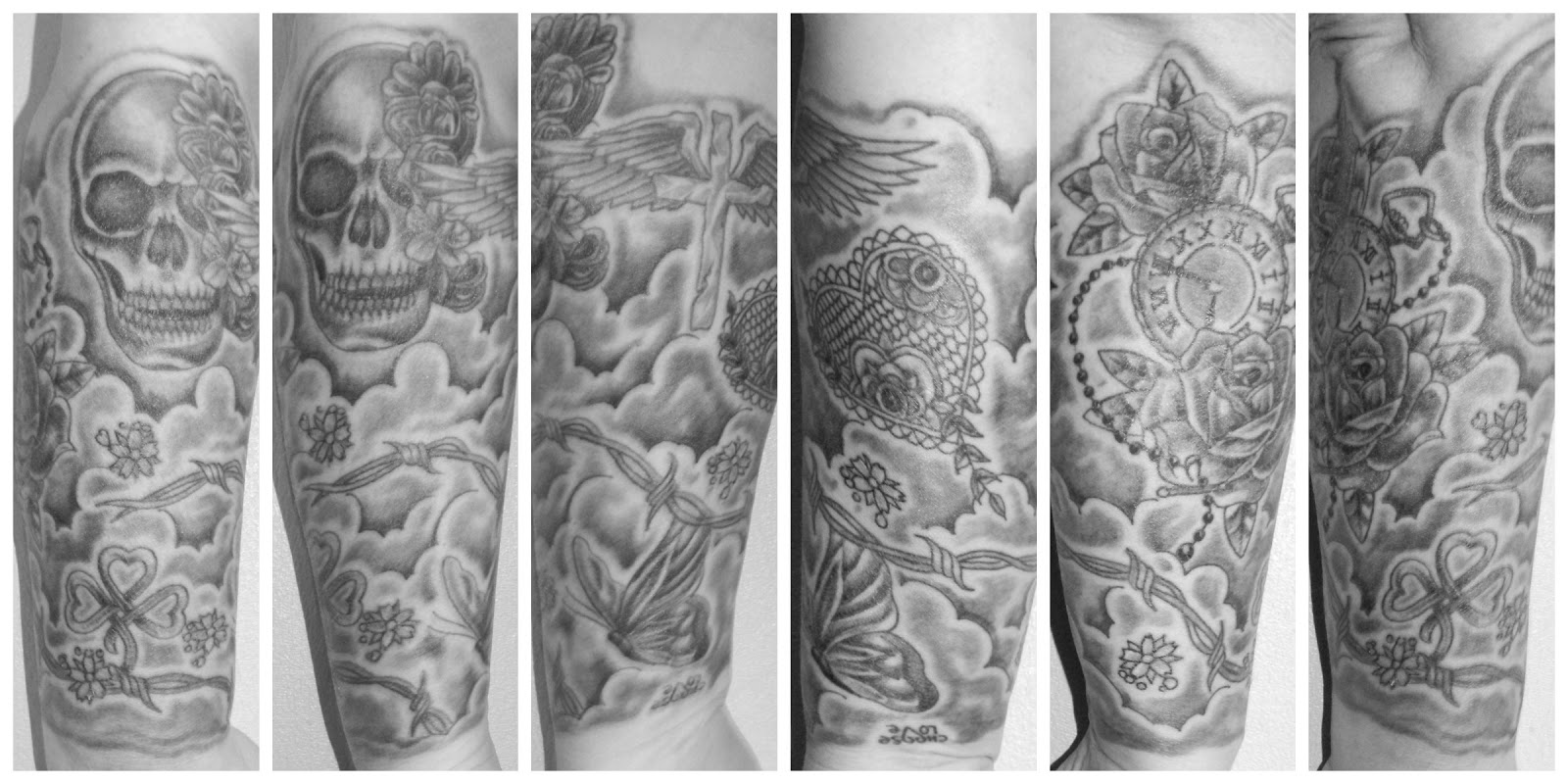 Because of its prominence it is always going to be commented on and it may create a barrier between myself and someone else because of personal opinion but I'm open to other viewpoints. I know I'll still be proud of it in another 42 years time and may have even added to it by then.  There are some amazing tattoos out there and there are some disasters (bad artists, drunken choices, rush decisions - people do learn from them though) but if you view a tattoo as part of the person you can consider it to be part of them and their journey through life.