The Story Of The Communal Microwaves

April 06, 2011
This is a strange tale.  It is the tale of two microwaves and other electrical equipment in a communal kitchen. 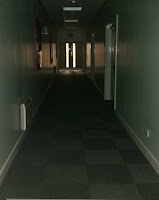 Once upon a time, a tall, dark, less-than-handsome man showed a young lady and her older companion around a block of offices.  The young lady and her older companion were invited to the Smallest Rooms in the building but were assured that down the long dark corridor lay a Room Of Treats.  This very special room housed a water boiler, a water cooler, two microwaves and two toasters.  All the electrical appliances that one could wish for, especially when such modern technology was BANNED from the Smallest Rooms in the building. 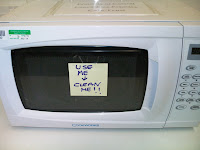 The two microwaves were Very Special Microwaves.  One of the microwaves had the ability to communicate with the young lady, her companion and their friends through an extraordinary medium.  It could write secret messages for them to read.  The second microwave had been claimed by The Evil People.

The Second Microwave disconnected itself from its power point and locked itself away in a plastic pencil case, poised like Houdini, ready for escape at an appropriate time.  It waited, and waited, and waited.  The young lady, one of her friends and one of the Evil People discovered the Special Microwave and thought that it was going to suffocate so BROKE the plug out.  The Secret Microwave was ever so grateful and gasped its gratitude whilst spinning and heating.

The young lady, her friend and the Now Not Very Evil Person went back to their Small Rooms very pleased that The Second Microwave had been saved.  The friend left work for the day and wished the young lady well.  The young lady decided that she needed to get a glass of water from the water cooler.

Suddenly, the young lady realised that The Second Microwave had disappeared along with The First Toaster.  When questioned, the Second Toaster refused to speak, obviously traumatised at what it had witnessed and very distraught at being left behind.  The Water Cooler denied all knowledge of anything.  The young lady did not know what to do and has to find a way to break the news to her older companion and her friends on Monday morning.

The moral of the story is this.  Electrical Items know their place and we should  never assume that communal equipment is actually for the use of the community because Evil People will always believe otherwise.
communal kitchen microwave office work