April 28, 2011
The reason my wedding was arranged was not a conventional one.  My boyfriend had just been released from serving eight weeks of a six-month jail term (long story, another time) and with his Get Out Of Jail Free card release grant we bought a new engagement ring for me as I had originally bought my own.  We then visited the local Register Office to publish our banns and booked the wedding for three months later - 1st August 1992.

Next, we stood in a phone box and we rang our parents.

Neither set of parents were over the moon about the arrangements.  One set (mine) said that they already had their annual holiday booked and they would be away for the date we'd picked.  Strong-willed as ever, I stubbornly announced that I would rearrange the date, slammed the phone down and stomped all the way home.

Another trip back to the Register Office the next day allowed us to rearrange the date.  We were now getting married on 11th July 1992.  We phoned the parents again with the new date and they resigned themselves to the fact that this was actually going ahead - in eight weeks time.

It never occurred to me to ask my parents to help pay for the wedding.  I had already left home, had a bit of a fractured relationship with my family, I had a child and I was fully capable of supporting myself.   Our plans were to buy suitable outfits, go and get married hoping that a few people would be there to support us and retire to a pub for drinks or something later.  All done on the cheap with minimal fuss.

I took a trip to the local wedding shop to enquire about hiring a dress but was a bit shocked at prices - the rental price was half the cost price.  Way beyond my budget.  I had to come clean and explain our situation.  We had very limited cash allocated to the event and had to see if I could pay for the cost of a dress in installments, even though the wedding was only eight weeks away.

I was directed to the back of the shop and shown a rail of dresses.  I was told that these dresses were "last season" and had either been hired out or used for promotional purposes.  I flicked through the rail and picked a couple of dresses up.  When I tried them on there was always something negative about them; the wrong shape across the shoulders, too low cut, too much of a meringue.  I gave them all back and resigned myself to picking something up from a suit-type-affair from a high street store nearer the big day. 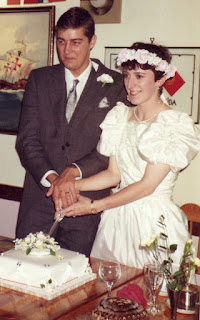 I glanced back towards the rail and took one more casual look through the dresses.  And there it was... my dream dress from my childhood - the fairytale dress that I had always imagined.  Full length, no fuss or frills, a subtle amount of detail, fitted bodice, small bussle, full length, straight skirt, no hoops and a short train.   I had to try it on.  To my amazement, it fitted!  Like a glove.  It was a little bit tight around the bodice but I was assured that it could be taken out and adjustments made - all in time for the big day, two months away.  And the best bit?  It was priced at £49.  Yes, you read that right - forty nine pounds!  I made arrangements to have the dress altered slightly and to pay it off weekly.

A couple of weeks later both sets of parents had a chat with us.  Mine offered to pay for a small reception at a restaurant local to them - immediate family only (running to about twenty people).  They would arrange photographs too - a family friend with a decent camera and tripod - then order some different sizes for the album.  Kev's parents offered to pay for our wedding rings.  Plain gold bands, beveled edges, matching.

I went out the next week and bought a beautiful dress from Woolworths for Rachel (she was my unoffical bridesmaid), some bits and pieces from the market to make my bouquet and a headdress for Rachel.  I was still very aware of our non-existent budget but needed to make the best of what we could afford.

Then my whole world imploded.

We found out that Rachel had cancer and all thoughts of the wedding went right out of our heads.  In fact, it was only after her definitive diagnosis that I remembered we were getting married just a few days later.  And I say this without remorse, malice or bitterness - I didn't really care about the wedding any more but I still wanted it to happen.  My stubbornness had to see through the "now or never" part of it all.

We were due to get married on the Saturday and I had to pick up my dress on the Tuesday before.  Rachel was at the hospital and I had to sort out a few things at home so I escaped for the day.  I took Mum with me to show her the dress and she fell in love with it for all the reasons I had.  I now knew it was perfect. She also convinced me to allow her to buy me a headdress to match the flowers in my bouquet - but I didn't want a veil, that I was adamant about.  I paid the final payment on my dress.

The day before the wedding was a blur of activity.  We went to pick up a hire suit for Kev, drove to Manchester to pick Rachel up from the hospital (we were allowed to bring her home for one night but she had to return on the Saturday afternoon to prepare for an operation on the Sunday), drove back from Manchester and just generally made sure everything was ready.  We were at our own house and we were leaving for the Registry Office from there together in the morning.  I was getting myself ready and doing my own make-up.  At about 7pm my Dad turned up at our house, hovered in the front door, gave me an envelope and said, "I don't know what is in there.  Your mum asked me to give it to you.  She also said to remind you that she has sorted the taxi out for the morning.  Just watch out for it at about 9am.  See you tomorrow, love." And he was gone.

I opened the envelope and inside was five £10 notes and a letter explaining that it was the money for my dress.  There was also a few more personal lines and I regret to this day that I didn't keep that letter.  I have no idea what happened to it. 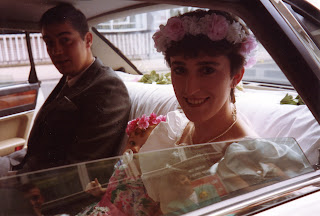 The morning consisted of me bustling about in a daze.  I put on my make-up whilst sat on my bathroom floor with the mirror propped up against the bath.  I then dressed Rachel, put Kev in charge of making sure she wasn't chemo-sick down her dress and went to get my own dress on.  As I was coming down the stairs, there was a knock at the door.  There, suited and booted, was my uncle with his company car (a white Jaguar) all kitted out and trimmed up, ready to drive us to the Registry Office.  I know it sounds a bit daft now but it was a little touch that meant a lot to me.  Travelling in style rather than in the back of a taxi.

At the registry office a few family and friends were milling round and we nipped into a side office to take care of the official form filling.  When we came out, more and more family and friends turned up and we managed to cram about fifty people into a room that normally seats thirty.  I looked around for Lou, my closest friend at the time, but she wasn't there.  She also had a young daughter and I knew that she probably had something feasible keeping her away.

Vows done, more photos and the conveyor belt that is the Registry Office hustled us on outside so that the next wedding could take place.  We posed for a few more pictures so that those not joining us for the meal could snap a memory of the day.  A car screeched up across the road and a voice called out of the half-open window, "NIC---KIEEEEEEEEEEE..."  I glanced up, saw who it was, picked up the bottom of my dress and legged it across the road.  It was Lou, hanging out of the window, talking nineteen to the dozen, "Nickie, you look gorgeous.  I can't get out of the car, I'm in my nightshirt!  I overslept but I couldn't miss seeing you in your dress."  I laughed so hard and then looked around.  All our guests were staring at me, wondering what the hell was going on.

We moved on to my parents house for more photographs and then onto the restaurant.  We ate, we had speeches and all toasts were directed to my very brave daughter.  Our cake had been made by three of mums friends; one baked it, one iced it and another decorated it.  We just had time to cut it before we jumped into Dad's car and drove to Manchester, still fully togged up, to take Rachel back to the hospital.  Our honeymoon was spent in a little B&B a few miles across Manchester and we returned to the hospital at 8am to escort Rachel into the operating theatre.

It feels like a day that never happened but I know it did.  It wasn't my dream wedding with hundreds of friends and family but it was the start of the next stage of our live together.  We managed a week away together, alone, in March 2009 - a mere 17 years later.  Even by our standards, it's a long time to wait for a honeymoon.

Well, twenty years down the line we are still together and (mostly) happily married even though not one person thought it would last (two fingers up to that lot - 22 years and counting *thumbs nose*).  As this blog shows, it hasn't always been a smooth ride but we both believe that you take the rough with the smooth and what doesn't kill you only makes you stronger.  Neither of us give up easily either.  I want to renew our vows at 25 years, or at least have a big party, but Kev isn't really one for public shows of affection.  I have a full-on plan with entrance music and a "first dance" sorted out, seeing as though we never got chance back in 1992.
1992 marriage wedding