My Birthday... social media and tears!

May 03, 2011
As I venture into my 40th year on this planet, I think about lots of things but mainly how the hell I made such fabulous friends... people I've never actually met.  Yes, all those weirdos on the internet!  Those ones you are warned not to talk to.  And after reading this, you might like to heed those warnings after all but I think they're all just smashing!


I arrived at work this morning to find my email inbox flooded with alerts from Facebook telling me that lots of lovely people had left birthday wishes for me on my "Wall".  My Twitter @mentions column was bulging with similar messages from many of my followers.  Apart from handful of real life friends, all of these congratulatory messages were from people I have "met" on forums through the years, via Twitter or through blogging.

(actually, if you'd have all sent me £5 I'd have been rich much happier able to treat myself quite handsomely)

Anyway, I was brought up good and proper and started to thank all of my well-wishers for their joyous messages even though it did feel a bit repetitive saying "thanks, love" over and over and over again.  Just after expressing my gratitude to Pippa she suprised me by leaving a link to a gift... the gift of song.

She made me cry!

Now, you know as well as I do that the Twitterverse and the World of Blog is all about oneupmanship.  Someone else had something to say:

Hhmm.  I'm going to set @GeoffTheDog1 on him later today.  That'll learn him...

Then, simultaneously on Twitter and Facebook (yes, I do allow people to overlap on there if I like them A LOT) this poem appeared from Paula.  I'm a sucker for a decent bit of rhyme. 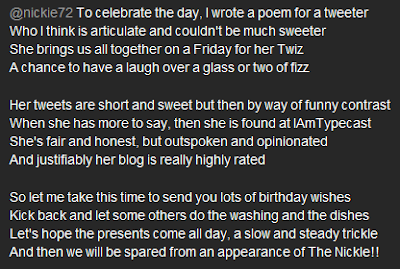 So I cried again.

Excuse all the "in-jokes" and references to Twitter.  We are all a bit... you know... *twirls finger next to temple*

Because of work committments, I had to go to a meeting at a local factory (a LOT more interesting that I thought it was going to be) so the emails and tweets started backing up again.  When I checked the updates I saw that Arena Flowers had sent me a lovely message (real flowers are always welcome too, guys, but what a great way to get a mention on my blog.  I like!!) and I also saw this in my Twitter feed from @paulkclews:


Paul, did you know of my adoration of the Ukulele Orchestra of Great Britain?  I have no idea who you are but you made me smile and I just know that you recorded that especially for me (it's ok... just let's say you did for today *wink*).  And you can also play the Blackadder theme tune and the Laurel & Hardy theme tune which puts you up another notch in my book.  Nice work, my friend.  Don't be a stranger now!

And finally, when I returned home from work I was greeted by my whole family (yes, the whole mad bunch - grandchildren as well) for a party tea with sandwiches, cheese & pineapple on sticks, sausage rolls, quiche, birthday gateaux - the full works.  From a family who very rarely does anything to surprise me.

I went to hang my jacket up in the hallway and cried again.

I'm so bloody lucky, aren't I?  Seriously, this was one birthday I expected to be slightly under the radar because it's The Big One next year.  I think the moral of the story here is that your family can always do something to surprise you and that the kindness and hilarity of people on the internet never ceases to amaze me.  Cheers Guys!!
birthday crying facebook family friends friendship happy birthday internet party social media social networking twitter ukulele