November 18, 2011
This time last year I was telling you about my inclusion in an anthology of creative writing of which all profits were being donated to Children In Need.  You can still buy the book, you know - Tiny Acorns is HALF PRICE on the Dotterel Press website now (and postage is free).

So what is going on this year? 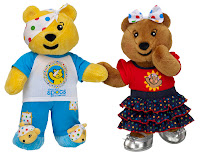 The Build-A-Bear Workshop have teamed up once more with Children in Need to create a very special Pudsey and his BFF, Blush.  Last year Build-A-Bear sold over 11,500 Pudsey and Blush bears with £5.00 from the sale of each going directly to the charity - the total donation was £135,000 and they hope to top that this year.  This year, Pudsey has brand new pajamas and slippers and Blush has a new pinafore.  £1.00 from the sale of the outfits is also donated to Children in Need.


This year my own contribution will be to run the Friday Twiz in support of the Children in Need charity using both the #FridayTwiz hashtag alongside the #cin hashtag.  Social media is so powerful when raising awareness and this will hopefully connect some people to the charity that don't normally get involved.  The subject will be Children In Need Past And Present and it's all just a bit of fun.  You can read the very loose 'rules' here.

Note:  The Friday Twiz will start at 9.30pm and normally runs for no longer than an hour.


What do you normally do for Children in Need?  Is it simply a case of sending the kids to school with 50p for "non-uniform" day or do you go all out and join in with a charity event?


PS:  We watched Children In Need Rocks last night.  On the school run this morning, Jake said, "Gary Barlow is a really good singer, isn't he, Mum?"  When I asked him why he hadn't thought that before he replied, "I thought someone did some twiddly bits with his voice or he mimed all the time like everyone else.  He was really funny when he sang '... twist of separation...' and did that little jump of the piano seat.  It was like he'd been electrocuted or something"  I'M SAYING NOTHING, OK!!
build-a-bear charity children in need tiny acorns