My Jar of Hearts on canvas

June 07, 2012
When I got my new camera for Christmas I started experimenting a little and took a few pictures which I was probably a little too overjoyed with.  I called the set "Jar of Hearts", blogged about them, created their own album on Google Plus and even set one of them as my desktop wallpaper.

Then we decided to tart our bedroom up.  You know, treat ourselves to a new bed (*nudge, wink*), new wardrobes, a lick of paint and maybe a couple of nice pictures.  Let's just say it's been a work in progress for a few months now and we have only just finished.

The old romantic in me wanted get one of my "Jar of Hearts" pictures on canvas and hang it on the wall and, just by sheer coincidence, HelloCanvas emailed me with a challenge.  They wanted me to send them my best picture - one that I thought they couldn't match the quality of at large size.  In return they would attempt to reproduce the image on a 50x70cm / 20x28inch canvas as long as I gave them fair feedback.

Challenge on!  I sent them this picture: 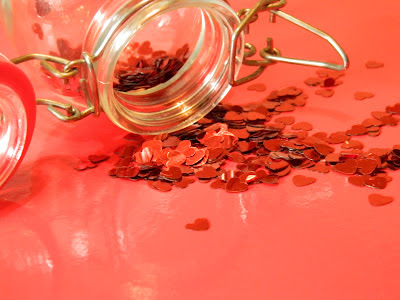 The canvas arrived within a couple of days AND IT IS HUGE!! Over this week I have been on leave from work so we have managed to get the bedroom sorted out, buy some new wardrobes and hang the canvas because I love it.  I'm not sure the pictures below do the size of it any justice but the new bed is a SuperKing size (it's all about the supersize at the moment) and the bedroom is a really odd shape (a bit like me, really). 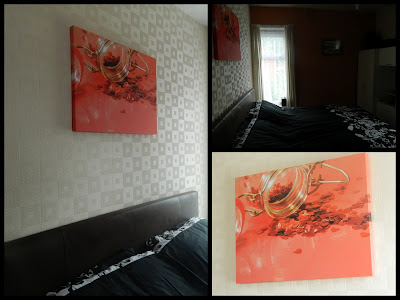 It's a shame that the canvas looks washed out in these pictures but the colour is perfect in reality.  We have two windows in our bedroom (you can't see the one to the right) and I've tried about ten times to get a decent picture.  Save lying on top of the new wardrobes commando style, there's not really much more I could do!

So, now you've seen where the magic happens, do you think the canvas is going to make it even more special?  I live in hope...
canvas print HelloCanvas Jar of Hearts photography