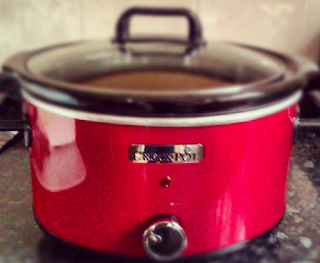 I was drooling over Aly's Union Jack Crock-Pot® a few weeks ago, mainly because of its unusual design (I'm a sucker for a Union Jack) but also because I've been hankering after a new slow cooker for a while now. Well, Aly is a bit of a cool chick and recommended me to Crock-Pot® who sent me this completely lush Crock-Pot® to try out (see the end of this post for the finer details).


I already have a slow cooker - it is really ancient and just has a basic on/off switch. It is enormously heavy as it has a good, old-fashioned ceramic pot but it does the trick, even though I've never really used it for more than chucking meat in to cook  ready for tea or for making a hotpot. I keep reading the 'Slow Cooker Sunday' suggestions (#scsunday on Twitter) and thinking "I must try that one day" but wondered about the High/Low settings suggested for a lot of the recipes.

So, killing two birds with one stone, I thought I'd try out the new slow cooker and attempt to make a something that I've never done before... a chilli con carne. I know - how on earth have my family survived over the past twenty-odd years without me cooking "proper" food?

I found a chilli recipe on All Recipes UK and I've changed it up a little (see below). It's gone down a storm in our house and looks like it could become a new family favourite. We have had ours with rice but it would be great as a jacket potato topper. 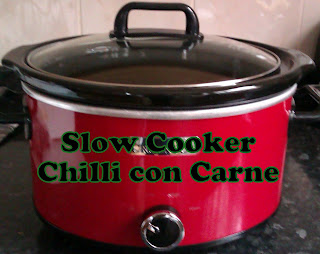 Watch out for more attempts at slow cooker recipes over the next few weeks.  The slow cooker is ideal for winter warmers and Aly's post (link at the top) has some great hints and tips as to why a slow cooker is a fabulous option for many different households.


The other stuff that you need to know if you want one of these ace slow cookers.

Each new design comes with a selection of recipes to kick start your home cuisine, expertly marrying ingredients to make sure your dish tastes as good as it smells. Once the ingredients are chopped up and in the pot, they’ll gently simmer away on either a low or high heat setting while you get on with your day, producing a delicious dish for you to settle down to when you’re ready.

As with every Crock-Pot®, cooking in the pot means nutrients are kept within the dish, intense flavours are locked in and you’ll use less electricity than conventional cooking.

The Crock-Pot® New Design range is available from June and can be found at Amazon.co.uk, RRP £34.99. For more information on Crock-Pot visit www.crockpot.co.uk.  This Crock-Pot came with full instructions, some complimentary utensils and some recipe ideas.