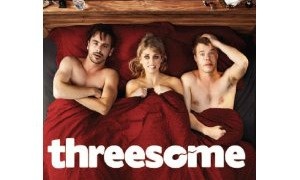 There were hilarious guest spots from Pauline "Mrs Doyle" McLynn and Adam Garcia (swoon...) and it's probably the only time that I'll admit to a bit of a girl crush on the female lead.  Highlights of the first series were the lads going out and getting smashed when they were on a sober-promise to Alice, a space hopper fancy dress costume for Alice when she was almost at her due date and the three Nanas-to-be trying to make out the arrangement is normal and cool when they just really don't know how to handle it all.

I promise you, it's way more funny than I'm making it out to be.