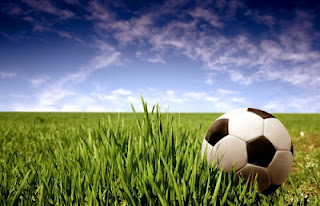 I shall start by saying I know fuck all about football.  But maybe that is why I believe my viewpoint is a valid one.

I have always lived within striking (see what I did there?) distance of well-known football team home grounds and have seen the passion the some people have for "The Beautiful Game".  To me, it's just twenty-two grown men kicking a bag of wind around a field.

Over the years, I've seen a skilled sport degenerate into a world where money prevails all; sportsmen (note: not women) are paid enormous amounts of money, drive fast cars and generally live life in the fast lane.  I don't begrudge anyone spending their hard-earned money on what they want - that isn't the point here.  I want to know WHY these sportsmen NEED the wages that are provided.  Even more money is thrown at 'buying' players and state-of-the-art stadiums are built with a revolving door fitted onto the manager's office in many cases.  Well, it feels like it when I read about my 'local' team, Blackburn Rovers.

The focus seems to have disappeared.  Surely all that is needed for a game of football is a field and some jumpers for goalposts?  Maybe a flask of tea and someone running on at half time with some quarters of oranges.  Or is that just the view through my rose-tinted glasses?  Let's remember that I can only take in football scores when they are accompanied by a typewriter noise and that I once wrote to Dickie Davies for a sports project at school.

In my day job, I coach young adults through a course which improves their confidence and motivation and encourages them to work together as a team as well as flourishing as individuals.  We use footballer's wages as a direct comparison to teacher's wages, doctor's wages and wages given to people who work in the emergency service or armed forces.  It always sparks an interesting debate.  But no-one can ever answer the one question that we always ask...  do footballers deserve the wages that they are paid?

I often hear people bemoaning the way in which celebrity notoriety is created these days.  My own analogy is that we have so much disposable media at the moment and because 'news' is immediate, media outlets have taken Andy Warhol's 'fifteen minutes of fame' expression literally.  Many of my peers want to know how I can bear to watch something like X-Factor, Big Brother or similar, which catapults a previous unknown to the glitzy and heady heights of fame with no safety net and a massive fall in the offing.  I ask the same of footballers.  When did this need for fame and money become interjected into the sport.  Footballers seem to do very little for their inflated wages and they court ultra-spending.

Local teams used to be made up of local people.  Local people knew their players - some of which may even have been family members or friends.  I recall lads in my class at school aspiring to play for their local team and trailed footy scarves displaying local colours.  Now, the kids of today 'support' the team with the highest paid player unless there are some family ties to a particular team.  Players are bought in from one country and others are sold out to other countries.  Supporters shirts (kit) change as often as the wind, some teams even have their own subscription television channel and games companies have tapped into the gamer market with a new interactive football game coming out each season.  It's all about the money, money, money...

Would bringing it back to basics and having local people playing for a local team save money, reinstate values and inject some much needed cash into our local communities?
football sport