A few weeks ago she rang me up and invited me for a coffee and a catch-up.  The hook was that she had a present for me.  Now, Amanda has a hot pink A5 Filofax, unused and unloved, languishing on her desk. I have hinted about adopting it on a number of occasions and actually dared to think that she had finally decided to give it to me.

We met at our usual haunt and she was carrying a rather un-Filofax shaped package with her.  We ordered our coffees and sat down.  She handed me the package.

If I could have raised one eyebrow I would.  It was heavy.  I shook it and she screamed, "DON'T SHAKE HIM!" 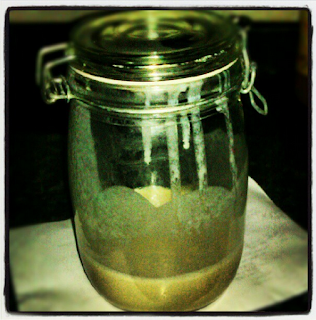 I opened the package and was greeted with a mason jar full of some gloopy mixture.  My heart sank.

It was a fucking 'Friendship Cake'.  The type of gift you only give to frenemies.  I have survived almost twenty-two years of parenting without ever accepting ownership of one of these things.  A fact that I'm very proud of.

I sighed a deep sigh and pushed it back across the table.  However, because I had taken the package, I couldn't give him back - it would bring me bad luck.  I had been tricked into accepting him.

The problem is, I'm also not in the slightest bit superstitious but who ever wants to test that theory?  I wrapped Herman back up and Amanda proceeded to tell me all about how to look after him (a frigging full sheet of instructions - more of that in a minute), how he would grow and how I had to talk to him and sing to him. She even gave me a demonstration in the cafe. 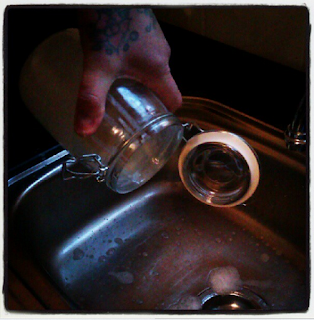 I took Herman home and Kev laughed in my face. He told me to throw it down the sink but  karma and superstition were playing on my mind.  We did tweet out this picture to see what Amanda's reaction was.  She didn't exactly wish bad things on me but she likened killing Herman to murdering one of my own children.

So I put Herman in a bowl and I covered him with a tea towel leaving him in a warm place.  I followed the instructions.  I didn't talk to him and I didn't sing to him (have you heard me sing?).

Do you want to know why he grows?  Because you  have to add* about eight packs of flour, two-hundred pints of milk and half a ton of sugar.  And you do this twice during his 'lifetime'.  You also have to stir the bloody thing twice a day.  I think this is where the singing is supposed to come in but I 'forgot'. 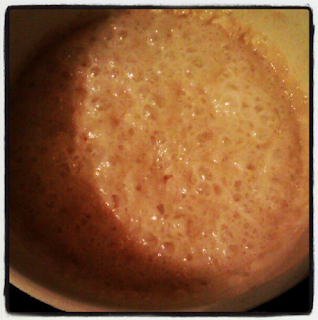 Ten days passed.  The bowl housing Herman was a bit of a hazard in the kitchen but we worked around him (Him?  She's got me at it now!).  My whole kitchen smelt like my Dad's home brew kits back in the 1980's.  I was supposed to split it into four - give two away, bake one and that start the whole naffing process again myself.

But I didn't know a single person who I hated enough to pass it on to (Sharon, if you're reading this, you had a lucky escape, believe me).  Everyone I mentioned it to just laughed at me and sent thinly veilled threats if I dared to go near them with an unbaked portion of Herman.  They'd all been stung before.

It's like a baking version of a chain letter or a pyramid scheme but with no benefits to anyone.  The only people left in my life that would be eligible to receive Herman were the girls at work.  I put the bowl to one side whilst I had a search in the cupboard for two empty jars.  I have no idea what happened next but...

Was it an accident or did he jump?  Is it because I didn't sing to him he decided to end it all?  I am free from  guilt and, more importantly, free from the Herman chain.

*This is a slight exaggeration.  You can find the exact Herman recipe on the Netmums website.