The Head Honcho Of All The Ponchos

January 19, 2013
I've been banging on about 'finding the crafter within' again recently and may have mentioned it a few times here *cough* Silent Sunday *ahem* Mother of Purl *cough* but, for once in my life, I've actually finished a few projects.

I mentioned that the next one would be a BIG project as I'd seen the pattern for a poncho that looked a bit unusual (no Clint Eastwood jokes, purleeeeeese).  Because I am me, I decided to use needles and wool that I already had so I wasn't too sure how it would turn out.  What do you think? 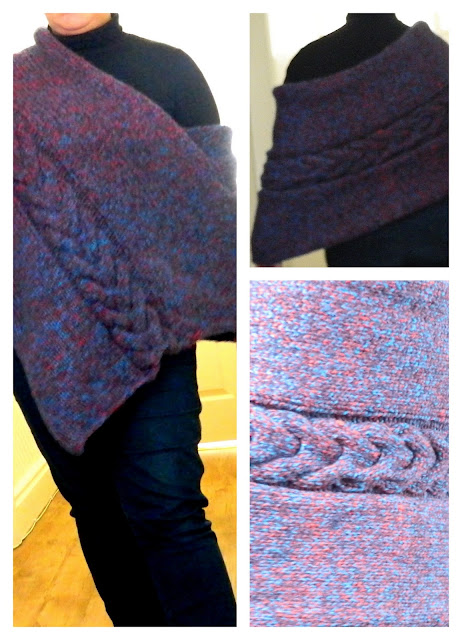 As I've changed the pattern slightly I'll tell you what I did.

The yarn recommended (a tweedy, rough type yarn) wasn't available so I used double chunky because it was on offer at the market.  I only used one strand of wool instead of two as the original pattern suggests.  The make of the wool I used is Byzantium and I used 4 x 200g balls which cost £3.49 each.  I used size 8 needles and a 5mm cable needle that I had hanging around.  The wool is a red, blue and purple mix.

[a new pair of needles usually cost a couple of quid and a pair of cable needles is about £1.50]

These 8 rows form your pattern.  Knit this pattern 25 times in total

Sew one short edge to the end of one long edge as seen below. 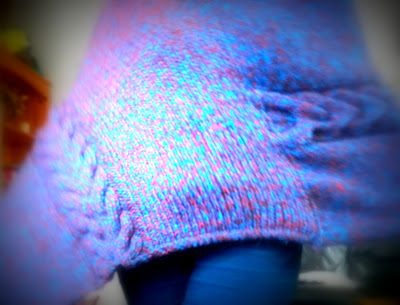 How it knitted up using my method:

The neck of the poncho is very large which means it hangs on your shoulders or off one shoulder.  A great look for some but this doesn't keep your neck very warm.  However it does feel like a huge woolen blanket wrapped around you so great for these chilly evenings.

What I would change:

If I knitted this again, I would knit the pattern format fewer times which would make a shorter 'point' but also a smaller neckhole.  I'd like to try this with different types of wool too.  I'll let you know how I get on!