My Love Affair With The London Underground 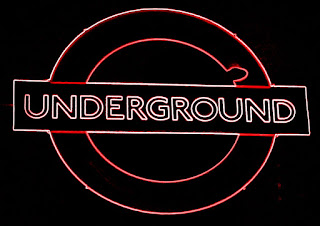 Today the London Underground celebrates it 150th anniversary.  I fell in love with the Tube system when I visited London for the first time in 1981.  It was the magic of this network of tunnels underneath a city that I wanted to explore.  The names of stations on the maps that would lead me to a world that lay undiscovered by myself but seemed so ordinary to others.

The first time I rode the Underground was an experience in itself.  My dad worked for three days a week in London and it had been decided that myself, my mum and my sister would join him for our half term break.  He drove down with our caravan attached and worked for a couple of days.  The rest of us followed on by train on the Friday.  We pulled into Euston Station and I was given the all important job of planning our Tube route.  Mum knew how excited I was by this.

We were meeting Dad at one of his places of work.  A tube journey and then a bus would deliver us almost to the gates of the factory that he was visiting.  We headed towards Brixton with slight trepidation as it wasn't that long since the recent riots that had dominated the newsreels.  As the train neared Brixton the carriage we were on emptied.  By the time we reached Brixton we were almost alone.  One man sat at the opposite end of the carriage reading a newspaper with a headline splashed across the front leading a story about the riots. I have no idea how my mum felt but I could sense the tension.

We exited the train and started the walk towards the wooden escalator.  The man followed.  He stayed behind us all the way until Mum told us to stop and she pretended to be searching in her handbag for something.  The man overtook us and we were alone again.  We continued the ascent to the main entrance on Brixton Road, always looking over our shoulder.  I can't remember the time of day but I can remember it feeling very unusual that the station was deserted.  We reached the main foyer of the station and the world around us sprang into life again.  People, buses, taxis, noise.  In the hubbub of an unusual and (then) notorious part of the city we strangely felt safe.  We had survived and it had excited me - even at such a young age.  I wanted more experiences.

Over the past couple of years, my blogging adventures have taken me to our capital city more times than in the rest of my life.  Each time the train nears Euston station I get butterflies in my stomach.  The excitement grows, I call up my map of the Underground that is embedded into my brain and start to plan my journey.  I know that I enjoy the Tube journeys because I am not using the system every day and, so far, haven't experienced any problems or delays; I know the novelty would possibly wear off if I relied on it as my main mode of transport.  Or would it?

Last time I headed through the maze of tunnels I passed through Tottenham Court Road and had a rush of nostalgia.  The Eduardo Paolozzi mosaic in the Rotunda sent me headlong back to that first visit to London and I remembered seeing it when it was still unfinished.  It remains so unique and I wanted to stay there a while to take proper photographs but I had to move on and attend appointments.

I think the more regular trips on the Underground have made me want to know more about it and over the last year I have become engrossed in many aspects of the network's history and learnt about other people's geek love of the same.  There was the Look for Longer picture that I blogged about a while back (70 Underground Stations in one picture) for starters which was a great conversation piece.  More recently there have been a couple of books that I have been reading.  Walk The Lines - by Mark Mason who decided to walk the route of each London Underground line, but overground - taking in the sights and history of the city as he went.  And then there's Mind The Gap - by Emily Kearns which is a  book about the history, the present and the future of the Tube.  I have no idea if all these activities are connected but maybe my subconscious has been thinking about this for a while.  Or maybe there has been some clever subliminal promotion focused on those who want to know about it?

I'm just so fascinated by the way in which you can reach any part of London (and beyond) by this labyrinth.  Whilst travelling along in a carriage I see the name of the station that I'm passing through and immediately want to be above ground discovering the history and being a tourist but I also want to stay in the carriage and people-watch and eavesdrop (one of my favourite pastimes).  I am captivated by the people who clamber aboard, settle into their seat, bring out their iPad or Kindle and then one stop later repeat the process in reverse.  I love seeing the mixture of city workers and dwellers alongside the tourists; one group not chatting or making eye contact, the other excitedly discussing their next tourist adventure in a myriad of accents and languages.  I wish that Charles Pearson could have seen his vision come to life and I wonder what he would have thought about the size of the network now?

You can find more Tube Geekery over on Geekalicious where there are some great links for you to follow.