April 13, 2013
Sorry if you've arrived here under false pretences.  I'm not talking about balmy summer weather but thought it was time for a "You Need To Hear About My Puppy Again Especially If You're Not Following Me On Instagram" type post but it wasn't really a snappy enough title and El had already coined the genius "Pupdate" title for Jarvis who is almost exactly the same age as Michi (see her YouTube Pupdates here and the size difference between a six month old Akita and a six month old Yorkshire Terrier).

I'm a nervous dog owner.  Michi has no sense of recall whatsoever unless you're standing in his eye line and rustling a packet of treats.  But I want a dog I trust as much as he trusts me and without a garden it's difficult to train him.  I've been taking him up to a local country park (yes, we are VERY lucky to have that close by) and using a quiet part of it to have him off lead, chasing a ball (he won't bring it back but he will stand next to it until you walk up to him, pick it up and throw it again and then he will bound after it).  But the nerves are still there.  I envisage a dog fight or Michi running off and never ever coming back or him leaping on someone and knocking them over (he's only six months old but he is so big).

So we went to the beach yesterday. There's nothing more a dog wants that to run as fast as he can in an open space. 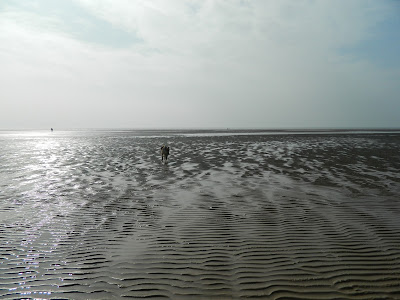 I knew I could let him off the lead but was unsure how far he would run.  I knew he wouldn't completely desert me but he has a 'thing' for birds and I was worried about how I was going to run on a beach to catch him if needed.  But he had a really good run around, had a bit of an altercation with another dog but it was friendly playfulness and he didn't run away when I tried to put him back on the lead.  It looks like the tentative training on the park was worthwhile and it's something that I'm going to make an effort to keep up now that the evenings are lighter for longer.

And finally, he's also learning about his own personal space (he claimed the rug in front of the fire at an early age - see here). Early on Thursday morning I woke early and I could hear a noise that sounded like someone was reconstructing Billy Elliott's dance down the cobbles in the back alley.  Tap tap tappity-tap tap tap tap.  But it's not unusual for a strange noise in that vicinity (long story, odd neighbours) so I ignored it and went back to sleep.  When I actually got up for work and went downstairs, I found Michi's crate door open and him laid on his bed inside the crate but he'd obviously been for a wander round during the night once he found FREEDOM.  The tapping noise would have been the cage door against the radiator.  But what amazed me most was that there were no 'accidents', nothing was chewed and he'd taken himself back to bed.

I'm glad we made the decision to crate him at night.  It's something that I've only done with one other dog and it means that house-training and night-time settling has been quicker and easier.  It's something I'd recommend to anyone (ask Sophie - she's doing it now with her new pup, Sadie). The crate is HUGE; it takes up a large space in our kitchen but it's the perfect size for and but I never use his crate as a place for punishment so he knows it's a safe area.


It's so nice having a dog in the house again.

If you're a dog owner, do you have any advice for me to stop the worrying or to help with the training?
dog dog cage puppy training