How (Not) To Survive On Benefits

Before I start (and go off at a tangent, as usual), this isn't about the fact that there are some intelligent young people on benefits.  Or about how un/fair the system is.  Or who pays in and who takes out.  Or whatever grievances you have about the welfare state.  We have a benefits system, we are lucky to have it and people are entitled to use it. I've been on it.  I'm not now.

There's a huge danger when a member of a political party says that they can live on an example low income as Iain Duncan Smith did when discussing the welfare reform system this week (source: BBC News).  It is by coincidence that the low income amount he was challenged over is quite similar to the amount that a single person (currently) receives weekly whilst in a position to be considered eligible to actively seek employment.

Does anyone remember, many years ago, a government minister appeared on the Kilroy programme and she was given the weekly benefit to live on?  She swanned off and spent it all at Aldi and fawned over her "bargains".  She was then reminded that she would have had bills to pay, a taxi/bus to and from Aldi and all sorts of other considerations.

There is a media expression that is used to describe people not in employment, education or training - it's 'NEET'.  Of course, this means anyone in this situation but is generally aimed at 16-25 year olds.  I work with young people in this situation on varying levels to try and help them gain new employability skills or to gain the confidence to change their attitude towards employment.  Because there is a huge misconception about young people on benefits in the UK I designed this meme (based on a concept made popular last year for varying subjects) to use as a marketing method.  (Click to enlarge) 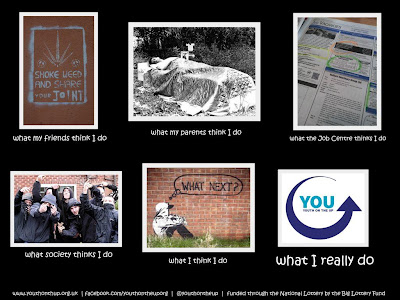 I'd like to use my 19-year old son as an example.  He has it easy living at home, don't you think?

He completed two years at college and left with a motor vehicle studies qualification.  During his course he should have take part in some sort of work experience placement.  The college had no work experience places available for any students due to job shortages in garages and every opportunity sought was fronted with a similar outcome.  Therefore the only practical experience on the course was in the college garages.  Since leaving college last year he has attempted to find work with varying outcomes:

Everything that happens has a knock-on effect.  I'm trying not to get personal in all this but, because my son is under 21-years old he is not entitled to apply for assistance with housing benefit.  I ask him to pay £25 a week towards living expenses.  In this is included EVERYTHING; his share of the household bills, food, wear and tear on the washing machine/dryer/oven/furniture/carpets/curtains/bedding... You name it, this is his contribution.  It also includes the internet connection that he has to use to record his job searches online and the mobile phone contract I agreed to help pay each month so he can ring opportunities as they arise. He has some money left over, naturally but this goes towards the cost of applying for jobs (printing CVs, stamps, envelopes, travel to and from interviews and opportunities, etc.).  There is probably more but you forget exactly what is included until you start breaking it down.

If he left home, for whatever reason, he would have to move into shared accommodation, a homeless shelter or find his own flat.  Where does the deposit come from?  This Bank of Mum and Dad have no savings to dip into thanks to living costs being so high at the moment.  We are lucky that we have no loans (other than the mortgage) but we have no excess funds either.

I am not condoning the fact that he is 'sponging off the system'.  This is about government ministers not living in the real world, making wild accusations about survival (because that's what it boils down to), making it difficult for people to start or return to work and patronising people who want to be out there working for a living and paying back into the system to support our country.

Whether or not you agree with what I have written here the comments section remains open for discussion.  I would also appreciate it if you would share this post with your online communities to keep this discussion moving.