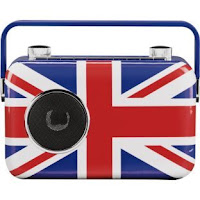 I always knew that I had a face for radio and I can talk the hind leg off a donkey when it's a subject I'm comfortable with.  So from ringing up for random quiz shows and late night chat shows to appearing as a guest on BBC Lancashire, I found myself in a Preston FM studio being interviewed in a work capacity by Will Buckley for the Chat City programme.

The second I pushed the set of guest headphones over my ears I knew I'd found a comfort zone.  The show recording passed all too quickly however Will talked me into returning to Chat City on a couple more occasions.  It has been a great place to promote work in a local setting and also to learn that I definitely do love the medium of radio presenting.

Preston FM is a community radio station.  Presenters are volunteers and are from the local area.  They have free-rein over topics and music that is featured on-air.  So when the station offered the opportunity to train as a presenter I jumped at the chance.  Obviously!

Five sessions lead by Darren Jenkinson of DigiEnable were interesting and taught at a comfortable speed and level.  Interview techniques were honed and show themes were designed.  The final two sessions were very 'hands on', learning about equipment used in the studio and planning an actual half hour show.

Now, half an hour doesn't sound like a long time but you soon realise that you have to plan the presentation from the first second of air-time to the last and have to include a certain amount of jingles, promos, a specific chat-to-music ratio you also realise that you can't just walk into the studio, flick a switch and do a bit of talking and spinning some wheels of steel.

I was paired up with Mark and we attempted to plan a show.  We started off with a HUGE idea that involved music in some way - a subject that we'd both mentioned we would like to base our shows around in the future.  With a bit of brainstorming we came up with a concept that we were confident would work.  You can have a listen if you like.

So what's next?  I have three shows to plan and record (for May, June and July) and then come up with a show idea.  I'd love to take Soundtrack To My Life to radio but I am also trying to think of a concept that hasn't been done yet.  Maybe an open mic session for local writers/poets or something that incorporates my love of the 1980s?  I know inspiration will just hit me between the eyes one day and I need to practice, practice, practice.  I'm just so excited to be realising one of my dreams.