#beatcancersooner - How Can You Help?

August 02, 2013
Today I have two posts for you about Cancer Research UK which tie in with my recent Race For Life activity and fund-raising.  You can find the other one here.  As you know, I also host a series called "Cancer - Your Story" which encourages sharing of personal stories by those who have been affected by cancer in whichever shape or form.  If you would like to contribute to the series, please get in touch. 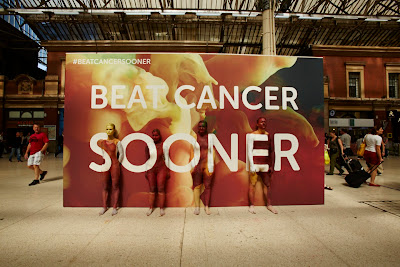 A month ago, a billboard with a human twist stopped commuters in their paths as Cancer Research UK launched a new campaign asking everyone across the UK to take one million actions to "Beat Cancer Sooner".  Adam, Anna, Parminder and Linda, who have all survived cancer, became part of the billboard at London Victoria Station.  The image above is from Cancer Research UK's TV advert.

The new campaign (#beatcancersooner) is asking people around the UK to help generate 1 million actions against cancer. By ‘actions’ they mean things that will make a real impact, like signing up to fundraising events (you can still donate via my Race For Life Just Giving page), volunteering, classifying cancer cells on the Cell Slider website (of which I have published more about in my other post today) and sharing information about cancer and campaigns on social media. The more people who get involved, the more awareness can be raised about the role of research in bringing forward the day that all cancers are cured. 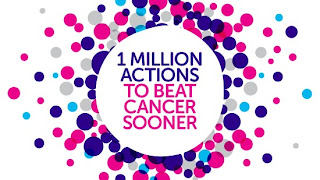 Thanks to all supporters the work that CRUK put into the prevention, diagnosis and treatment of cancer has seen survival rates double in the last 40 years. And each year they help millions of people get the information they need to understand the disease, as well as campaigning on key cancer issues.

But there is still a long way to go before anyone can say all cancers are cured and survival rates for some cancers are not improving.  More work needs to be done in the fights against cancer and your help is needed to encourage as many people as possible to join us to help #beatcancersooner.

Thanks to CRUK for the additional information.
Please take some time to click the links to learn more.

Please view my disclosure policy for more details about publication of posts of this nature.
No payment was received for this post.
cancer cancer - your story Cancer Research UK