Live on Chorley FM : Wake Up To The Weekend

October 20, 2018
Ever since I was a panellist on Sally Naden's daytime chat show on BBC Radio Lancashire, and then took part in a blogger take-over on radio stations around the UK talking about healthy breakfasts, I fell in LOVE with notion of presenting my own radio show at some point in my life. Fast foward a couple of years and I found myself promoting an adult learners course on a local community radio station (Preston FM - sadly no longer in existence) and was encouraged by one of the presenters to join the next training course to become a presenter.

I wrote a two hour show that was based around the spoken word (poems, short plays, monologues) and then ended up hosting my own quiz show on Preston FM - The Big Cheese - which ran for six episodes and a couple of one-off specials.  I also had the opportunity to be part of an actual radio play - Welcome To Our Village, Please Invade Carefully - which is very funny, you should have a listen! But volunteering takes up valuable time and sometimes real life and jobs that pay the bills has to take precedence. So I put the dream on the back burner for a bit. 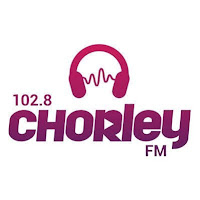 Through a certain amount of circumstance, I found myself back in the studio today with my fabulous podcast co-host, Rowena.  We bagged ourselves an hour on Chorley FM (yes, THAT Chorley FM - it really does exist, and NO we are not allowed to say "coming in your ears" which is a bit of a challenge...) from 9am to 10am.

Our show was hopefully mindful, motivational and a little bit mad (people may say, exactly like its presenters) and it was totally live.  There were a couple of hiccups and we had to get used to the workings of the studio but we were literally thrown in at the deep end with a quick "this is the desk and this is how it works" training session beforehand. Luckily, Rowena has worked that type of desk during her time on hospital radio but I'm definitely going to be learning and refreshing on the job.

I'm not going to lie, I was SO nervous.  I think it's the first time Rowena has seen me like that and she found it hilarious! Rather than calm me down, she just told me to get on with it and laughed at me - but that was probably the best course of action. It's no good pandering to me because I'll just carry on panicking.

We did advance warn our friends that we were going to be broadcasting to the nation local community and they very kindly joined in with our request to contact the studio for a "Saturday Shout Out" so it was lovely to see that we had support from the outset.  We were also broadcast live to the runners at Blackburn GroupRun's Saturday session (thanks John!) and lots of people outside of the area listened online and gave us some awesome feedback.  I wish I could share the show with you but that facility isn't available just yet.

There's a few extra pictures on my Instagram account if you want to go and have a look.  I want to go back and do it all again RIGHT NOW! Hopefully, there will be that opportunity in the not too distant future.  Stay tuned!!