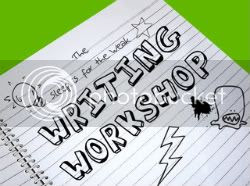 Whilst reading (and snorting rather loudly at) Manda's blog post yesterday about what she read in her daughter's Literacy book, I didn't think that there would be something similar in my son's Project book tonight at his parent's evening.  He is writing about Henry VIII and without actually "translating", I'm sure you can see why I laughed out loud at this piece. 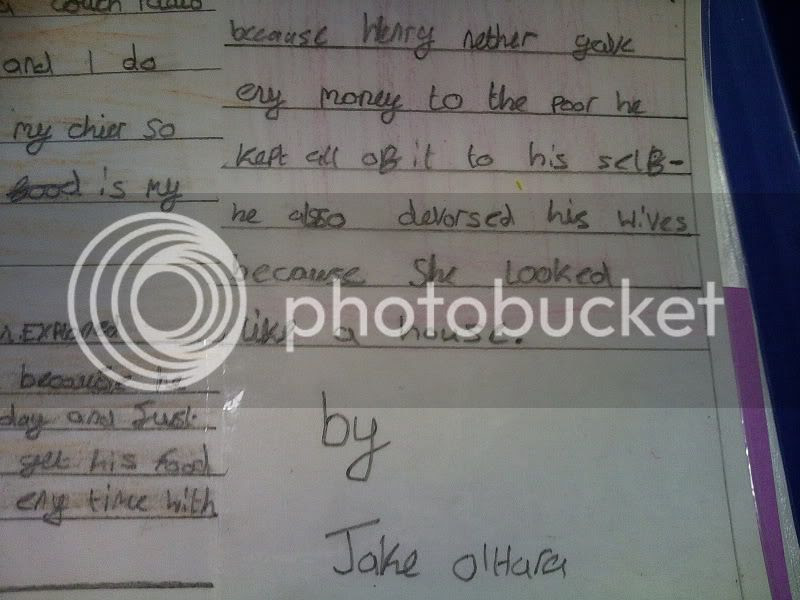 ...Henry nether gave eny money to the poor he kept all of it to his self - he also devorsed his wives because she looked like a house.
I despair... and I throw my hands up and raise my eyes to the heavens.  Remember the British Telecom adverts with Maureen Lipman back in the 1980's?  Well that's me - but I'm not Jewish!!
I don't know where I've gone wrong; all my kids are the same.  They don't have neat handwriting, they can't spell and they don't really like writing for any length of time.  Part of me believes that this is the down-side to the digital age that we live it - everything these days can be typed onto a screen... and many schools today have interactive whiteboards.  I know that they have all had the weekly spelling tests but there doesn't seem to be the need for accurate spelling - is that because of the auto-spell-checker incorporated into writing applications on computers these days.  I have even caught myself dithering over the spelling of a word (for example: definitely/definately) when actually handwriting (I know - shock, horror) something and, in a weird sort of way, I expect a red wiggly line to appear underneath it if it is spelt incorrectly.
So all this leads me to consider what my children will be able to do when they move on to the next stage of their lives.  If they can't write/spell what the frig can they do!?!?!
Rachel:  I need a translator to decipher her texts but she's not as bad as she could be - probably because she knows it annoys me.  She's a young mum now and is concentrating on her baby babies child(ren) and she has already expressed a wish to return to college when they are both at school full time.  She will only by 24 years old by then but she has no idea what do aim for other than to complete her motor mechanics course.  In the Writing Workshop Dream Factory she will find a way to use her drama training and her singing voice.  I'd love for her to be "discovered" whilst singing karaoke in some scruffy little pub in town, be given a record contract and Andi Peters would be filmed pressing the START button at the CD factory in Blackburn when she released her first album.
Michael:  He leaves school this year and is so laid back that he's almost horizontal.  I've previously blogged about his um-ing and ah-ing about joining the armed forces and that moment has passed.  He actually thought he could take a "gap year" and not actually do anything - but he still wanted to live here, to be fed, watered, have access to the electric for his X-Box and computer, etc without any money crossing hands!!  That was only until I told him that I'd expect him to pay board money from the 1st of September if he didn't have a job or wasn't attending college.  He's now signed up for a two year motor mechanics course (do we see a theme recurring here?) at the local college.  In the Writing Workshop Dream Factory he will invent a new X-Box game.  He will be the modern day Matthew Smith and his game will be the 21st Century equivalent to Manic Miner - only better.


Jake:  As you all know, he is going to high school in September and I still have a little bit of influence over him, although that is slowly waning.  Currently his main ambition is to be either a demolition man or a free runner.  He attended an Acrobatic Gymnastics club for two years and he has amazing potential therefore in the Writing Workshop Dream Factory he will enter the 2016 Olympics with the British Gymnastics team and win at least one Gold medal... maybe two or three.


They can only be master of their own fate and their own future.  I just hope that I'm nudging them in the right direction.


This blog post was written for Workshop #18, Prompt 3 - What do you secretly dream of your children doing? - run by Josie at Sleep Is For The Weak and you can find all the other Workshop posts >> here <<