My first experience of foreign shores

January 27, 2012
It was 1983, I had just finished primary school, was looking forward to going to high school and we were setting off for a two-week holiday in the caravan, in France - Mum, Dad, my sister (aged 7) and myself.  It was the first time we had ever ventured away from the UK in the caravan so Mum and Dad booked us onto an organised 'rally' with the local branch of the Caravan Club, we prepared for long car journeys and swotted up on our Franglish.  As we were newbies to foreign travel we were paired up with seasoned caravanners on the same rally and we were all (30 families) to meet the night before the ferry crossing in a field somewhere just north of Weymouth.

Disaster #1
No-one told dad that it was advisable to disconnect the fridge from the car battery power during the ferry crossing.  After the crossing, we arranged to meet our paired couple on the dockside, we all piled into the car and... nothing.  No power to the car.  The fridge had drained the battery.  All the cars around us pulled off the ferry and we saw the door closing.  By this time, my sister and I were in tears as we thought we were staying on the ferry and going back to England.  We had no idea that there was an upper deck of cars.  Suffice to say, some jump leads were found, my Dad was suitably embarrassed, we got the car and caravan off the ferry and set off on our journey.

Our base for the two weeks was the grounds of a château in the small town of Granville, Normandy (cue lots of very unfunny 'Open All Hours' jokes from Dad).  A lovely caravan site with a patisserie for traditional French breakfasts, an open air swimming pool, a park and plenty of space to arrange rally events such as 'theme nights', sports days and communal barbecues.  We settled into foreign caravanning fairly easily. 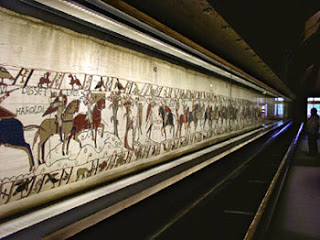 Disaster #2
A group day out to Baueux was arranged by the rally organisers.  We were to see the Tapestry, the Memorial Museum of the Battle of Normandy and the Normandy Landing Beaches.  Mum was glad about this as it took the pressure off her really.  A coach had been ordered for everyone, admissions had been booked and pre-paid and we would have a leisurely day to look around a town steeped in history.

The coach arrived.  There appeared not to be enough seats until the driver (who spoke no English at all) demonstrated that the arm rests along the aisle of the coach flipped down and round to make an extra row of seats down the centre of the coach - this is where the children were expected to sit.  All the parents were astounded and the only member of the group who spoke fluent French tried to reason with the driver regarding safety (even back in 1983 this was considered unbelievably dangerous), attempted to arrange another coach (nothing was available) and we eventually piled onto the coach and set off.  No windows would open, no-one could walk down the aisle of the coach to pass drinks around, the coach driver got lost, the only French-speaking Brit on the coach once again got roped into helping with map reading and we eventually got to Bayeux six hours after setting off from the camp site (it should have been a 2 hr journey).

Because of the length of the return journey and the fact that the coach driver was only booked until a certain time, we were told that we had precisely two hours in Bayeux before we had to set back off again. We queued for an hour and fifteen minutes to get in to see the Tapestry and literally ran around the U-shaped display, stopping occasionally to look at a certain part of it.  It must have been the quickest viewing ever.  Dad had foregone the Tapestry and had walked over to the museum.  Again, no real time to stop and appreciate the history of everything that was there.  And then the heavens opened so we couldn't go down onto the beach.

Disaster #3 and #4 and #5
This being a caravan rally and with no-one having to drive home at the end of the night, many families made the most of generally fine evenings and sat in each other's awnings with the children playing happily together and the parents sampling the local vino.  I had no idea how the next few ideas materialised but, now that I am an adult, I can hazard a guess at alcohol being heavily involved...

We returned to English shores with no more adventures - I don't think I could have handled much more - and I chose not to tell many people about my first experience with France.  Until now.