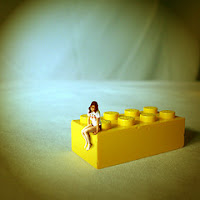 Today brings a guest post from Jo who blogs over at Single Slummy Mummy.  Once you've finished reading here, why don't you bob on over to her corner of the internet and see what else she's writing about?

Do you ever feel really small? Like you’re just nothing, with an infinite universe swirling around you, oblivious to your existence? Like a tiny krill in a massive swarm?

Actually, krill is a bad example. If you’ve seen Happy Feet 2 (which I would highly recommend), you’ll appreciate that a single krill, through the power of dance, has the potential to change the world. (really, you should see it).

But then that’s true of humans too isn't it? We feel small on our own, but we shouldn't underestimate the power we have to influence not just our own lives, but the lives of those around us.

Sometimes it can feel hopeless. Sometimes you can’t even begin to imagine what possible difference you could make to anything, and bothering to do something as pathetic as recycle your plastic milk cartons feels ridiculous. But then you have to stop and remember that really anything that has ever happened has started with one person.

One of my favourite quotes is from social anthropologist Margaret Mead, whose motto was apparently ‘be lazy, go crazy’. Mead said we should “never doubt that a small group of thoughtful, committed citizens can change the world. Indeed, it is the only thing that ever has.”

She also said that “You just have to learn not to care about the dust mites under the beds.”