January 26, 2012
Having your own stalker or troll is a sure sign that you're considered "a celebrity, write interesting tweets or are special" (thanks, @polythenepram, I think).  And, naturally, that means you are popular enough to for someone to make the effort to think up tweets to try and bring you to your knees, sobbing and wailing.  Let me set the scene... 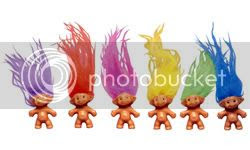 I'm watching the National Television Awards, tweeting out observations (because we all know that the only way to watch television these days is to sit with a social networking website in front of you and share your thoughts communally) and waiting for gossip from a friend who was in the audience.

Me:  Lovely to see a young actress from #Eastenders wearing a long evening dress #NTA

Troll:  They're keeping the chunky one off camera

Me:  Not sure what you mean. None of them are "chunky" #dickhead >> RT [name removed] @nickie72 They're keeping the chunky one off camera

Troll:  Not in comparison to folk that spend their sad existence on twitter I guess

Me:  hahahaha pot? kettle? >> RT [name removed]  @nickie72 Not in comparison to folk that spend their sad existence on twitter I guess

Troll:  no I'm on once a month fatty

Troll:  I'll pop back next month when you're giving another television commentary as you've nothing better to do

So, I've booked the date in my diary as I need to make sure that I'm providing a good service for him but as he has deleted all the "offending" tweets from his profile then I'm unlikely to hear from him again.  I hope he's blocked me, to be honest.  His twitter feed is full of stolen jokes and celebrity stalking so I'm in good company, really.

But, it's attitudes like his that give kids a shitty complex about themselves and promote an unobtainable image for anyone looking for a partner (and yes, it extends to both sexes).  Seriously, if this guy thinks that Jesy from Little Mix is 'chunky' then he has a totally unhealthy attitude to women and their body shape.  This discussion has been done to death but it always surprises me how blinkered some people are with regards to what is considered to be 'perfection'.

In the meantime, I'll leave you with this thought from Liska:

NewMumOnline:  @nickie72 @frugalfamily he only appears once a month...?  What, like a period and the full moon?  Both can make you mental!