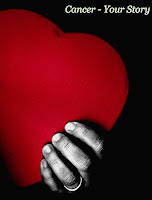 Editors Note:  I have exchanged a few emails with Peggy, The Narrowboat Wife because she wanted some people to give her ebook a read through before she officially published.  She writes beautifully so when she has the ebook on general release make sure you download a copy.  Anyway, we've been reading each other's blogs for a while and missed the chance to meet up at the very manic Cybermummy conference earlier this year.  After hearing my keynote speech and seeing that I hosted this guest series, Peggy asked if she could submit her piece about The Mellow Mum.


If you would like to submit a story to this occasional series then please
find more information on the "Cancer - Your Story" page.

I didn’t expect to be in Harlow again so soon. It takes nearly two hours to get here from Angel. I wander through the concrete wasteland in the darkness, avoiding solitary baseball caps and suspicious strangers with beady eyes. Blue hospital signposts direct me to welcoming strip lights, the yellow-lit entrance of the modern Princess Alexandra Hospital. I’m pacing down corridors, a sterile labyrinth quietly peopled by pale blue scrubs. I glimpse fading elderly people breathing noisily in hospital gowns, I find the ward and in contrast to the grey faded paper-souls my friend seems to beam like sunshine at me: The Mellow Mum. Thank goodness she is still real, still here! We have spoken only in text messages since two weeks ago, when she was told that she has lung cancer that has spread to her brain. I tried to phone her but she didn’t feel like talking; she was so tired. She wrote me a message that said,

“It’s all been a massive shock and always one of those things you think happens to someone else.....been a funny old week..feel very numb...one thing I keep returning to is my girls as you will understand..”

Before I have a chance to ask how she is, she is animated, chattering, and wants to hear my news. How are my girls? Will I really move in to a house? How do I get the pushchair up the steep sloping towpath in Angel when it is so icy? After a while, I encourage her to tell me her story. She asks me to draw the curtains around her bed for privacy. I trip over her drip stand twice and draw my chair closer to her. She tells me of her sore throat, feeling tired, then vision disturbance, numbness in left leg, dizziness, A&E, chest x-ray, the CT scans the MRI scan and how there doesn’t seem to be one moment when it all became fact. But it crept up on her and her husband and the professionals were saying, “We don’t give a prognosis, it could be nine months, eighteen months or five years”. She leans forward and confides in a whisper,

She has never really smoked.

“When I was younger, with a few drinks when you go out, you know.”
“Well I read a bit on line. It can be caused by passive smoking, asbestos, or Radon gas...”
“Really, I hadn’t heard that.” She is quite mellow.

The Mellow Mum is thinking about Christmas and writing cards, and taking her girls to see Santa somewhere. She’s heard there’s a good hospice near to where she lives: she might get reflexology. She is thoughtful; pragmatic. We chat about normal things, real things like our children. She asks me to give her some hypnosis tips and breathing exercises.

“But how is your husband finding it?” I ask.
“Oh you know. He’s so busy. He’s very tired. Looking after the girls and everything.” She pauses. “But then, he said, ‘One day I’m going to wake up and you aren’t going to be there’,” she sobs through her words and before she’s finished the sentence I am clutching her warm hand and I’m crying too.

Text from The Mellow Mum:

Hi had last treatment today so feelin tired but really pleased. Looking forward to 2 moro with kids. Have been so wiped out I have done nothing with kids so that is why haven’t spoken to any one as well. So good to be at this stage. Happy xmas. M. x x

It is a strange quirk of the modern world that sometimes the most efficient way to communicate bad news is on a social networking site. My friend’s husband announced that The Mellow Mum died at 5.30am on Friday 7th January 2011, seven weeks and two days after her initial hospital admission and subsequent cancer diagnosis. He posted a link to Charles Aznavour's composition, ‘She’ interpreted by Jack Jones.

She may be the love that cannot hope to last
May come to leap from shadows of the past
That I'll remember 'till the day I die
(Lyrics by Herbert Kretzmer of Les Miserables fame.)

The Mellow Mum was very kind and she was a very positive person. She was my main friend this summer when we were travelling around on the boat; she was the only person I knew who lived nearby in Essex. She liked visiting our boat and she liked to go on narrowboat holidays with her family. Tears run down my face when I think about how her tiny girls may not even remember their mum. I feel shock, anger and immense waves of sadness. Every moment of life is precious. Love is precious. Friendships are precious.
This weekend I am staying with Tank Girl, a precious friend. On her kitchen wall is a framed poem that I had forgotten I’d written for her, more than ten years ago.

Uppity people are out of control
They bring down your day taking bits of your soul
Because they don’t understand it  and cannot get with it
Don’t complicate lives, just get on and live it.
cancer cancer - your story lung cancer stage four