December 24, 2012
I found this picture a few weeks ago.  Scrawled across the back of it is 'Christmas 1981' so I was nine years old and my sister was six.  As soon as I spotted the bike in the picture a memory came flooding back. 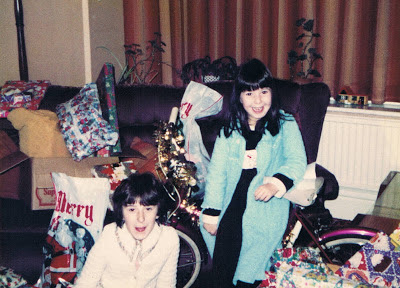 A couple of weeks before Christmas, Mum sent me down to the garage at the bottom of the garden to call Dad in for tea.  I can remember opening the latch on the door and startling him.  He attempted to hide what he was doing but it was too late.

He was respraying an old bike of mine - one that I had outgrown the year before. He knew he couldn't hide it and just said, "Don't tell your sister.  She'll think it's a new one."

It was a shock.  Up until that point in my life I still held some belief in the fact that Father Christmas had a workshop full of happy little elves, all creating the toys for all the children on the 'Nice' list that year.  But I also now felt grown-up and it was a huge deal to be a secret-keeper.

On Christmas Day we came downstairs to see if "He" had been and I the first thing I saw was my old bike, spruced up and covered in tinsel.  My dad and I exchanged knowing glances and we got on with unwrapping our presents but the grin on my sister's face made up for it.  And, to this day, I still don't think she knows what I know.
christmas family nostalgia