December 31, 2012
I've been knitting for, like, FOREVER!  I turned a few heads on the maternity ward when I was eighteen years old and knocked out three matinee jackets in a week whilst I was kept in 'for observation' during my first pregnancy.  Before Christmas I was sent a "knit your own snowman" kit as a thank you from John Lewis for sharing their 'Making Of...' video.  I promised myself that I would get it finished before Christmas Day... AND I DID! 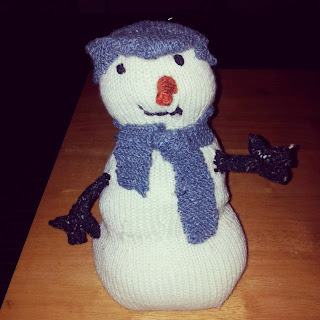 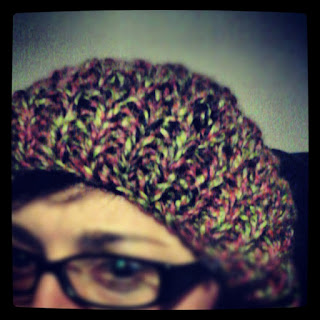 Then I finished the snowman properly (yay!)
Then I made a hat from a pattern in one of the knitting magazines back copies.
Then I realised I wanted to knit more.
Then I took a trip back to the market and bought more wool.
Then I posted up my Silent Sunday picture for this week and received comments such as, "I didn't have you pegged as a knitter" and, "Are you making anything nice?".

So this is what I have made over the past couple of days.  Each item has taken just a few hours to make - GOD BLESS CHUNKY WOOL AND BIG NEEDLES!  In case you can't tell what they are, from left to right, there is a hat (for me, as in the picture above), a bag (which is adapted from a pattern I found on t'internet) and another bag (which started life as a scarf to match the hat but I changed my mind half way through) 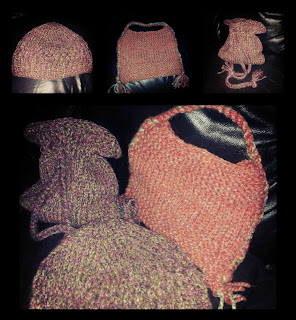 Next on the list is a weird sort of scarf, a lace-style shrug and poncho type thing (that's what I call a "big" project).  So, in the new year, I think I'll be spending a LOT of time on Pinterest looking for inspiration and free patterns.  And, knowing me, the cross-stitch will probably make an appearance again soon too!