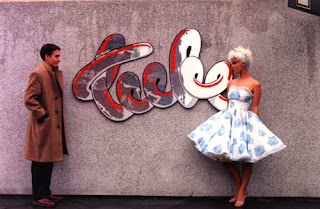 Whilst watching Rewind The Tube on Channel 4 I was transported back to a world that doesn't exist any more. One where proper music programmes featured the music of the now rather than a Möbius band of music videos presented in a themed show.  Just to prove a point to myself, I cruised the music channels on the satellite channels and found Power Ballads Heaven, VH1 Loves Justin Timberlake, The Hottest Girls in Pop and The Heat Hotlist on the first page of listings. Most of it makes me want to heave. 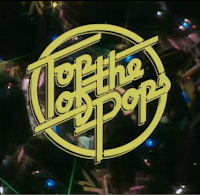 I would have saved my pocket money for a couple of weeks, then gone to Woolworths in the town centre and bought a single that I'd heard and liked. The week after I'd be glued to Top of the Pops on Thursday to see if my purchase had helped it up the charts at all.  None of this "straight in at number one or it's a flop" malarkey.

It was an era when vinyl was King, cassette tape was Queen (see what I did there?) and bringing up the rear were picture discs and coloured discs.  A time when taping the best songs of the week off the radio was a skill (god bless the double cassette players for 'mixing') even though you were vaguely aware it was illegal.

And it looks like I'm not the only one to remember this era fondly.  I mentioned this on Facebook whilst Rewind The Tube was on and a few of my friends shared their memories too.  As Claire points out, there aren't any real children's Saturday morning programmes any more either.  No way to get up close and personal with your favourite singer by sending in a question or entering a competition to win a hoard of music related prizes.  Who remembers Matt Bianco being called a "bunch of wankers" or (my beloved) Five Star being asked "Why are you so fucking crap?"?


The last show I remember that was structured this way was was SM:TV.  Is there anything today that allows a fan to get that type of connection with their group of the moment or is music too changeable and disposable?  Is it all about downloads, X-Factor and fifteen minute's worth of fame, with Cowell syphoning off a huge percentage?  Is there any way to get past the time that needs filling on our 24/7 television or the infinite pages on the internet?

My children are caught between a world of having vinyl and cassettes as a listening medium in the house alongside their CD's and digital downloads.  But my grandchildren will have known nothing other than virtual listening and music videos on a continuous loop.