My Life In Books 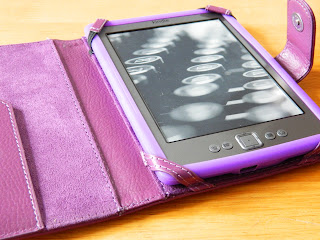 It's 24th March 2014 and I'm updating this post so that I can join in with another of Kate's Listography posts. She's allowed me poetic licence on this one seeing as though it was originally written in March 2012.

Ever since I learnt to read at the age of three I have been a book addict but after Kev suprised me with a Kindle one Christmas I've hardly picked up a real book.  I've read loads more though, tending to lean more towards recommendations and free Kindle downloads, expanding my reading genre.  I've also created a small-but-perfectly-formed Kindle group on Facebook full of reading suggestions, freebie alerts and writer/self-publishing information.

A couple of years ago I got a bit hooked on the "My Life in Books" programme hidden away on BBC2. Well-known faces were invited to share the books they love, explain why they had chosen them and read passages from them.  So I have decided to share some of my life in books with you.  Apart from two, I own the original copy from whenever and I often return to these for a bit of comfort reading. They have helped to enhance my love for books and there must be a reason I've hung on to them - but I can't work out what that is.

Maggie and the Roundabout (published in 1967).  This is the first book I remember having read to me and it's about a little gypsy girl who was given three sixpences to spend at the fair.  She spends all her money on food, has nothing left for any rides, manages to break the roundabout whilst operating it and ends up being shouted at by a load of adults.  But it all turns out OK in the end.

The Children's Book of Comic Verse (published in 1979).  Just a collection of short poems but I used to read some of these to my children instead of nursery rhymes.  I've just flicked through it and found this one by Elizabeth Wordsworth.  Poignant, I thought:

If all the good people were clever,
And all the clever people were good,
The world would be nicer than ever,
We thought that it possibly could.

But somehow, 'tis seldom or never
The two hit it off as they should;
The good are so harsh to the clever,
The clever so rude to the good.

The Growing Pains of Adrian Mole (published in 1985).  This copy is falling apart, literally, I've read it so many times.  I can't remember what happened to my copy of the first book, The Secret Diary of Adrian Mole, aged 13¾, but I'm currently reliving it on Twitter thanks to the 30th anniversary account @adrianmole30.

Echoes (published in 1984).  This is the first Maeve Binchy book I read and I fell in love with her image of Ireland.  It still makes me want to trace my roots and visit what is left of my family over there.  Binchy's characterisations always remind me of carefree summers spent on the beach or away in the caravan, but her stories are also full of twists and complications in a normal environment:

It must have rained some days.  There had to be clouds and a wind would definitely have come up at high tide.  But none of them remembered it.
[..]
It was the first summer for a long time that nobody drowned in Castlebay.  One child did get into difficulties but Dr Power made him vomit up all the sea water and in an hour the incident was almost forgotten.  A woman fell and broke her hip on the path going down to the beach and Dr Power went out in his shirtsleeves and hammered in a board nailed to a stick saying Very very dangerous path.
[..]
Clare watched it all from the shop.  It was like a different world to her, these carefree people with their different clothes every day.

The Turbulent Term of Tyke Tyler (published in 1979).  The inside of this book has got "If this book doth chance to roam, smack its bum and send it home" in my 9 year old hand writing along with my name and address.  My Junior 2 (now Yr4) teacher (one of the most inspirational men in my life) read this out to us as a class a chapter at a time. Tyke just gets into all sorts of mischief during the last year of primary school and there is a major twist in the tale at the end.

George, Don't Do That. (published in 1982).  I just love the monologue-style, observational writing talent that Joyce Grenfell had:

Come along, children.  Listen carefully to the music and then dance like a flower to it.
We're ready at last, Mrs Boultin.  I'm so sorry

One - two - Off we go.
Dance, Neville, don't just stand there. Dance.
Head up, Hazel, and use your arms.
Peggy, dear - don't forget to breathe.
Rhythm, George.  And cheer up - you're a happy flower, George.
Yes, you are.
Because I said so.
Oh good, Sidney, I knew you'd think of something.
All right, you shall be a cauliflower - only be it gently.

But what makes this book all the more special is that it has "Writer of Children's Books" snuck in at the back which is a complete piss-take of Enid Blyton.

Grandmother Oma (published in 1966).  This isn't my original copy.  That was a great big, large print, hard-backed version with a clear plastic cover on, a bit like a library book (which it probably was... keep reading for the explanation).  I called my paternal grandparents "Oma" and "Opa" because Opa was German and I think that Oma gave me this book as it was the Oma she wanted to be - a bit dotty, living in the loft, roller-skating, hatching eggs and a whole host of other stuff.  My own Oma worked at a library suppliers and her spare room was stacked floor-to-ceiling with books (seconds, out-of-print books, staff discount books) and we always received books as presents or instead of pocket money when we went to her house.  I wholly believe that this is what encouraged me to read more as a child; the fact that the next time we visited, I would have a brand new book to take home with me.

Children of the Dust (published 1985).  The copy I have is not an original but it was a book that really had me glued to the pages when I borrowed it from the school library.  I was massively into Judy Blume at the time (which teenage girl wasn't?) and this was completely at the opposite end of the scale, detailing a nuclear attack on the United Kingdom and the twists of fate that followed.

"Remain in your houses," the radio announcer repeated. "Do not go outside until you are told it is safe to do so."
Then, quite suddenly, his monotonous voice stopped talking.  And a few moments later the lights went out.
"This is it," Veronica said grimly.
"Bristol?" asked Sarah,
"It's all dark!" Catherine shrieked.  "I don't like it! I want to be with you, Mummy!"
"Stay where you are!" Veronica said urgently.  "Sarah and I are right here in the room and the dark won't hurt you.  You must stay under the table and look after William."
"I'm not afraid of the dark," said William, scornfully.
"Then you look after Catherine," Veronica said.
Sarah's whole body was tense and listening.  It was very dark in the room but a faint line of sunlight showed through the weave of the blanket at the top of the window.  She heard a rumble in the distance, a great wave of sound that came sweeping towards her, engulfing everything in its path, drowning Catherine's cries.  Sarah blundered towards the fragile edge of light as the blast struck the house.

The Second Kidstuff (published in 1981).  One of those "cute things that kids say" books but the illustrations that went with it were funny too.  This was another book I inherited from my Oma; I always remember it was on the ledge under the coffee table in her lounge and my sister and I used to read through it on visits shaking our heads at the daft things that children supposedly said such as:

It's a good job ink is cheap because I just spilt some on the rug!

Legs wear down that's why old people are small.

Has anyone ever escaped from school?

Wicked: Women's Wit and Humour (published in 1995).  I forget how I came by this book but it's been a firm favourite on my book shelf for a few years now.  It's one of those books that  you can dip in and out of with funny and inspirational quotes, poems, prose, stories and sketches "from Elizabeth I to Ruby Wax" (as the introduction says). 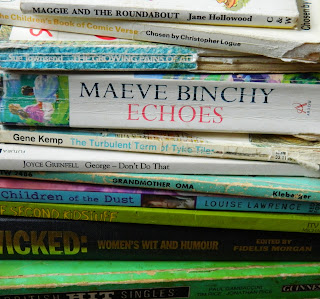 Guinness British Hit Singles (8th Edition).  My music bible stolen borrowed from a friend and never returned (sorry, Neil).  I've used this for music quizzes, to satisfy my own curiosity and to settle arguments.  My only problem is that this edition only goes up to 1990 and my knowledge is pretty ropey after that.  Maybe I should treat myself and fork out for a new one?

What do you think of my life in books? Does it tell you anything about me? Do you have any books that you can't bear to get rid of or that you can read over and over again?

I've also shared 101 books that are classics to me.  You might like to have a read of that too.