August 15, 2012
I bet you're all wondering how the #AppyBitches / #BGSaveTime campaign is going?  Well, first of all, Paula didn't do a runner with the iPad but she stuck to her brief and researched a number of apps to see how they could help her organise her life and maybe make it a little easier.  Her trip to Ireland to catch up with her family was the perfect place to start and she's been keeping a diary for me during her holiday and on her return home.  Let's see what she's been up to - over to Paula.

Well Holy God, there's an app for that

Whilst browsing the Dublin Herald I read about a priest who has been using an iPad to help him out at mass.  Apparently there's a four gospels app, a sermon app and a prayer app!  I've seen it all now.

Both of my boys celebrated a birthday whilst the family were in Ireland.  As part of the celebrations, one night we arranged for a cousin in Canada to join us in the pub via Skype.  Also family members were uploading party photos to Facebook before anyone had even sobered up so all our friends back home in England could see the shenanigans almost in real time.


I DON'T need a Kindle

So, since staying with my sister, despite the wonderful hospitality (she may read this y'know) the lack of a bedside lamp has meant that I've not been keeping up with my nighttime reading.  Then I realised that I have the iPad with a perfect Kindle app which, conveniently, is backlit.  I'm off now to remove a certain video from YouTube as I no longer need a Kindle.
[from Nickie: YOU'D BETTER NOT - THAT'S MY SONG...! For those who have no idea what we're on about you can read all about it here]

Back to life, back to reality 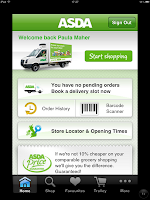 We're home now and it's a rude awakening.  My husband, an erstwhile luddite, has made himself acquainted with Angry Birds.  The lads have used it in quite an novel way (novel being the operative word), but more about that later.  Needless to say, I've not had much of a look in.  Having spent a wonderful 10 days at my sister's house where she did our washing, cooked our meals and looked after us like a creepy, overprotective landlady, it was time to stock the shelves and get ourselves back to normal.

I chose to use the Asda Mobile app as I shop in Asda the most and seems to be is idiot/hungover/lazy user-friendly.  There is a barcode scanner where you can just scan what you want.  However, as that would have involved both having stuff in the house and getting up off my arse, I opted out.  I find online shopping in general quite tedious and this was no exception.  I have to visualise the actual supermarket and make my way virtually up and down the aisles (now THERE'S an app idea!).  But I eventually found my way around and managed to get (almost) everything.. (we can do without loo roll, right??!)  I loved how it mentioned all the deals available to all products, could bring you straight to your favourite brands and grouped all the special offers so you could see if there was anything you wanted to avail of.  All in all, it was pretty good and, as it meant we could all stay in our PJs, stuck in front of the gogglebox after a hectic holidays, it was a big thumbs up from me!!

Since returning to work, I have also returned to "parenting by text".  I'm lucky that I didn't have to start working these hours until my lads were older enough to have a go at taking care of themselves.  But I'm still a mum... I find it hard to let go and worry constantly about them while I'm not around.  Their Dad works very close by which means he's first port of call in an emergency - touch wood, never has happened - but he'd never think to ask them, had they had lunch? Did you have a shower this morning? Have you got your key?

So to aid me with my mobile parenting (there really should be an app for that), I've discovered two apps which, while not quite able to nanny my lads, can make everyday life a little easier.

This is a simple little app that lets you keep a shopping list on your iPad/iPhone and update it when you think of something else (wine) to add.  Then you can email or SMS the text to one of your contacts, son or husband (if wine is required).  Simple, a tad gimmicky but served the purpose! 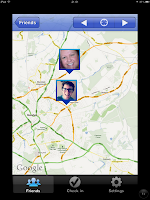 Latitude is totally new to me and the jury is still out.  This allows you to have a map on your iPad and using Google email addresses and some strange jiggery-pokery it can let you trace where people are via GPS.  To simplify, I add my lads Google email address into my Friends list, they allow my app to find them and it literally does.  It shows me on a map where they are.  Controversial, I know.  Invasion of privacy?  Probably.  Reassuring?  Possibly.  All too technical to understand? Definitely.  As I said, the jury is still out....

You can find more app recommendations in the comments on the first #AppyBitches post - which was imaginatively called "Introduction".  You can also find us chatting about apps on the dedicated #AppyBitches twitter stream where Paula gives live updates about apps she's been using.  To round things up we're going to hold a Google Hangout one evening and YOU'RE ALL INVITED (date to be confirmed). We will be discussing time and money saving apps (including how to manage your British Gas account online) and we may even sing you a song.


This is a paid relationship between myself and British Gas.
For more information about sponsored posts and campaigns please see my disclosure policy.