August 19, 2012
Should you ever write a blog post so personal that it feels as though it shouldn't be in the public arena?  I've been attempting to write a blog post for a few days and each time I start, I stop a few lines later.  I'm not sure if it's the nature of the post or just the fact that I'm not ready to write about it yet.


On Monday we had to have Yoshi, our 9-month old puppy, put to sleep.  We were totally unprepared for it and he deteriorated far too quickly for us to take in what was going on properly.  To cut a long and distressing story short the vet diagnosed an acute case of Parvo.  Yoshi was fully vaccinated and how he contracted the virus will always be unexplained although it's likely it is from fox feces at the allotment.  There is also the fact that he was the runt of his litter and was bottle-fed, therefore not protected by maternal antibodies which could have also left him at risk.  We will never know.

It was only at the beginning of this month that I posted two pictures of Yoshi to show how much he had changed.  He had grown so quickly and everyone who met him fell in love with him.  He was a really good-natured dog - especially with the grandchildren - and had become a proper member of the family.  It was like the final piece of the jigsaw puzzle.

The grief has hit different family members in different ways.  It hit my husband hard as he spent almost every waking moment with Yoshi.  On another level, depression and grief don't mix well either but that's different story.  The boys were very quiet and chose to spend some of the evening with their friends.  I felt lost and was listening out for everyone else, letting them know that it was OK to feel what they were feeling.  My daughter has had to explain to the grandchildren that Yoshi won't be here any more and that he has gone to 'doggie heaven'.  They don't really understand.

We are all heartbroken in our own way.

I know it's only been a few days but there is an occasional gut-wrenching moment when I realise that he's not here any more.  I am always first up in the morning and walking into the kitchen to an empty space where his cage was feels strange.  Seeing a sign for "Bark in the Park" made my stomach flip over as I for a split-second I thought it would have been a great event to attend.  No-one is clambering over him because he's has flopped down in a doorway or at the bottom of the stairs to chill out on the cool wood flooring.

So in my attempt to explain why I was trying to write something and failing I have ended up writing something anyway.  I hope you don't mind. 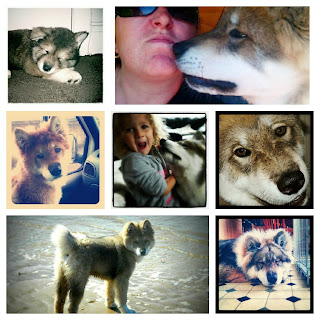