July 06, 2011
Let me take you through a visual generational introduction to my family.  When I was born it was the first time that there had been five living generations in our family.  My great-great grandmother lived until I was two years old and I'm sure there is a photo of us together somewhere but I don't appear to have a copy.

My great-grandfather was a wonderfully interesting man.  He lived until the grand age of 98, he was (at the time) the oldest and longest reigning supporter of Preston North End Football Club.  He drove a little yellow mini until the age of 80 and enjoyed the occasional game of crown green bowling.  It always used to make me snigger when I went round to visit (he lived at my grandparents house during his twilight years) - there was a fug of pipe smoke around his chair and, especially at Christmas, he had a stash of whiskey and pipe tobacco lined up on his little table.

My paternal grandfather was German.  He met my grandmother whilst residing in a prisoner of war camp near Kirkham during the Second World War.  She taught him English in the same way we teach our children - using speech and ABC books.  When the war ended he was shipped back to Germany but he came back a couple of years later and settled in England.  We called my grandparents 'Oma' and 'Opa' to keep the German tradition in the family.  Opa was a builder and an upholsterer and Oma worked at a library suppliers.  We went to visit every Sunday and the whole family - aunts, uncles, cousins - would convene there for tea and cake a-plenty.  Oma's vision was that they struggled so much during the war with rationing that she wanted to give as much as she could now that she had it.  I remember many family meals with up to 15 or 16 of us crowded round the table, each with a full roast dinner in front of us, all cooked on a aga-type cooker and a four ring electric cooker.  I have no idea how she did it.

[photo of Nana to be inserted here]My maternal grandparents split up when my mum was 16.  Grandpa had served in the Royal Navy and Nana was a "stay at home mum".  I always remember Nana having "plastic knuckles" from an operation she'd had to try and cure her arthritis, she smoked Silk Cut Red and was forever going to the shops in her slippers.  She made baskets and birdhouses out of lollipop sticks and when I slept over I stayed in double bed with a candlewick bedspread and had a cup of tea in her bed in the morning.  Grandpa lived in the next town with his aunt.  Is it bad that I cannot remember what job he did after leaving the Navy?  He smoked Capstain Full Strength and came to visit most Saturdays, bringing "sweets for the week" for myself and my sister - including Ovaltine chocolate which I have never been able to find since.  He was always whistling and his "cut a long story short" tales were so long that they lasted a full meal time. I always wondered what the long version was like.

It's no great secret that there was discourse when I found out I was pregnant at the age of 18.  My parents were still young (42 years old) and, as every parent does, just wanted the best for me.  They became doting grandparents to my (then) two children but divorced when I was pregnant for the third time.  Juggling divorced parents is not easy, especially three hours after giving birth and when emotions are still raw in may respects.  However, we all tried not to pass on our emotional stress to the children and I have always tried to speak about them in a positive light.  The other set of grandparents (Kev's parents) were also heavily involved in family life too which makes me very grateful that our children had such a great extended family who were happy to be involved where possible.


And to bring us almost full circle, when Rachel was born we once again had five generations in the family again as Great Grandad was still alive. 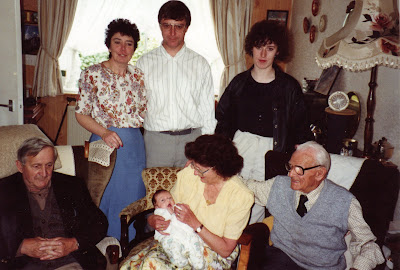 Which brings me to now.  I'm now a grandparent myself (Nana, naturally - it has never felt right to call myself Grandma) and I'm ultimately proud of my grandchildren.  It is so different to see the changes in them each week - like a speeded up video of a flower opening that you used to see on Sesame Street.  Their development seems more intense than it ever was with my own children and I want to give them everything that I couldn't afford or forgot to do with my own children when they were a similar age. 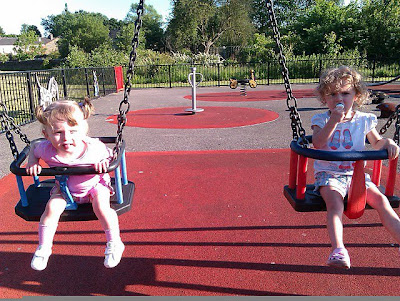 When my first granddaughter was born it seemed a shame that we didn't have the five generations again.  But when you sit back and think, could we have six (or even seven) living generations in our family.  It's extremely possible when you do the maths!

The Gallery
Theme: Grandparents
Click the image below to see the other entries 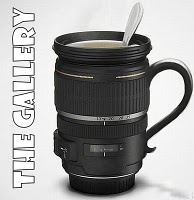