Guest : Turn It Off And On Again

July 23, 2011
Welcome to a guest post from Kate.  Most of you possibly already know Kate through Twitter or her blog.  What you may not know is that Kate used to work in IT support and has offered the recount of a very funny phone call as a guest post. 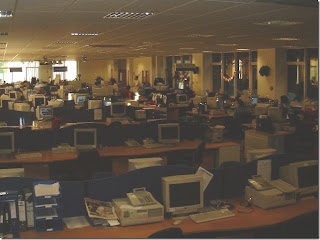 When I saw that Nickie was after some guesties to cover her holidays, I immediately thought of a subject to write about, Y’see, before I became a blogger, I worked in IT Support for 22 years.

And that, of course, means the IT helpdesk. Where every “IT assistant” starts their career – in fact most IT professionals seem to start there. You know why? Because no bugger else wants to do it. Helpdesks can be thankless places to work. People just want problems fixed but you’re often battling their IT knowledge and understanding of your instructions. I hate ringing helpdesks now because they tell me to try things that have me protesting “I’ve already done that” or “that’s not going to fix the problem, is it?” I’m a user that helpdesks detest – the know-it-all – and I spoke those words this morning and ended up fixing the fault myself. This is however infinitely better than the fiddlers who muck around with settings because they think they know it all but don’t, then deny it all when they break it. A little knowledge is indeed a dangerous thing.

My first IT support job was working on a helpdesk of an accountancy software house in 1984 – PCs were still rare beasts and Unix based multi-user systems felt very high tech because they didn’t need to be housed in a whole room. And yet, I bet my phone has more processing power and disk space than one of those. (And has a colour screen!) And talking of phones, we didn’t even have mobiles. The first mobile I ever had was about 9 years later, when I was given one by work. I could only use it in certain places and I could kill with a swing of my handbag.

My “customers” were largely dealers , who should have been more knowledgeable. Not always true. One day, I asked one if she had a fax machine – because these too were rare beasts and it was before email  – and she replied that no, she didn’t, she had a PC.

My favourite incident  from that time didn’t directly happen to me but to a colleague. She took a call one day from this chap,  who was a one-man business and known for his vagueness. He said something wasn’t working on one of his client’s PCs and she kept trying to talk him through checking the settings in the AUTOEXEC.BAT file to troubleshoot the problem. He kept going off tack and not seem to  follow her instructions. A frequent problem back then was that you would tell someone to “TYPE AUTOEXEC.BAT” and they would type “AUTOEXEC.BAT”, which would run the file, rather than display the contents. This appeared to be what was occurring and the poor girl’s tone was getting more and more frustrated. After a good fifteen minutes on the phone, she finally lost it inside and declared “STOP!” in a loud voice. The office stopped to look at her. This is the conversation she had next:

She repeated the words out loud to the rest of the office and the place erupted in laughter.

It’s moments like those that encapsulate life on an IT helpdesk. Filled with frustrations, but sometimes, you’ve just gotta laugh. Oh and the title? Words spoken by helpdesk workers the world over – but you know what? It does work more times than you would believe!
call center guest post holiday guest post IT