Playboy and Disney, hand in hand

July 29, 2011
Before I went away I wrote and scheduled a post about the attitude of members in a recycling group that my husband runs on Facebook.  Fast forward to our return and scrolling through the list of requests I see a number of


WANTED : DISNEY AND PLAYBOY ITEMS FOR MY LITTLE GIRLS BEDROOM 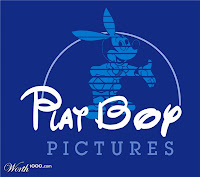 I know that this subject has been done to death but it is now heading for its second generation.  At some point in the past ten years the lines seem to have been blurred regarding Playboy merchandise and the ethos of the Playboy name.  My daughter happily scrapped through her young tweenage years without the glare of the Playboy logo on jewellery, pencil cases and clothing but it was starting to creep into the younger market.  Now, the logo is everywhere.


In some weird sort of way I want to applaud the publicity machine that is behind the massive, but very outdated, Playboy corporation for dragging it into the 21st Century but it has undergone no re-branding as such other than placing the bunny silhouette on a few carefully selected, much coveted, novelties that girls beg their parents to buy.

I found an article detailing why Mr Hefner's art director decided on the rabbit logo for the company.  He explains:

I selected a rabbit as the symbol for the magazine because of the humorous sexual connotation and because he offered an image that was frisky and playful.  I put him in a tuxedo to add the idea of sophistication.
Source: DesignBoom.com

Sexual. Frisky. Sophistication.  Not really words I would associate with children.

As the parent, we can refuse to buy these products - in fact, I know a number of parents who are as outraged as I am that this concept even exists - but there are always the parents that give into pressure.  And this is where my annoyance starts.

For me, the Playboy bunny logo stands for heterosexual pornography.  It represents women taking their clothes off to become an object for male desire.  I suppose there is an argument for women taking a stance (literally) and reclaiming the power through being able to make a man feel the way he does just by looking at the naked female form but at what point does that translate into a suitable logo to be placed on items of stationery or hairclips?  And the reason it is entering its second generation now is because the first wave of children who were bought these items now believe that it is ok for their own children to own products displaying this logo.

Has the Playboy corporation been desensitied through our many media outlets?  After all, almost every day in the media we are exposed to articles detailing the many girlfriends and wives-to-be (or once was) of Mr H thanks to tabloid reporting of Twitter conversations and the many fly-on-the-wall/staged reality shows imported from America.  Do we now not even bat an eyelid because of the amount of scantily clad women performing provocative moves in music videos?

I managed to raise my own daughter in a world where this was just beginning but now it is second nature to kids of today.

This is my first foray into Feminist Friday, run by Transatlantic Blonde.  Why don't you have a look at all the other posts on her link-up which center around reclaiming your feminism?