Guest : One For Sorrow, Two For Joy

July 12, 2011
Welcome to a guest post from someone I know from Twitter.  @EhMum makes me laugh so much with her random tweets so I asked her if she'd like to write me a guest post.  This heartfelt and honest post really touched a chord with me as my daughter wanted a boy so much each time she was expecting.
Jude prefers to remain semi-anonymous but blogs at "EhMummy" and you can find her on Twitter as @EhMum
~ ~ ~ ~ ~ ~ ~ ~ ~ ~ ~

Pregnant for the second time, I told people, unabashed, that I wanted another boy.  Somehow I felt two boys would be more straightforward.  Friends – particularly other mothers without daughters – were surprised, but for starters, I could remember myself as a teenager and wouldn’t wish that hell on anybody.

So, of course, I had a baby girl.
And thus it began.  While my adoring son (‘Boy’, 5) soaks up his mother’s wisdom with unconditional acceptance, placing me above my husband in the household hierarchy with an exasperating consistency (“But what did mummy say, daddy?”), my daughter (‘Girl’, 2) regards my instruction with a pick-and-choose flippancy that drives me to distraction.  Obedience was something proffered up by Boy without much question.  Of course he had his Terrible Twos, during which we established – through a series of exhausting tantrums, each one of which left me feeling as if I’d run with the Pamplona bulls* – that Mummy is in charge.
But with Girl, deference remains entirely optional.  At best I can hope for a lazy compliance, performed in a manner suggesting that she’s going to humour me just this once but “don’t ask me again.  I’m busy with this Happyland shit, right?”
I’ll begin by asking nicely, repeating myself patiently until I resort to monosyllabic commands (“Weetabix.  Now.  Eat.”).  These will increase in volume until I’m pretty much yelling, at which point she’ll look directly at me, smile her adorable, gap-toothed grin, glance down demurely and shake some golden curls prettily in my direction as she whispers a near-inaudible, “Noooooo”.
A silence in the house when Boy was her age meant he was engrossed in play or had dozed off.  With Girl, the realisation that five minutes have passed during which I haven’t been hollered at dawns with a dread feeling in the pit of my stomach.  I rush to seek her out and inevitably encounter some kind of devastation: lipstick smeared across mirrors; tampons ripped out of their packets and strewn across the bathroom floor; dolls, walls and wooden toys daubed with permanent marker. 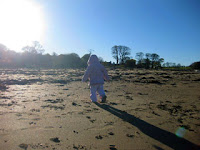 But Girl also has a way of looking at me, of cocking her head inquisitively as she stares directly into my eyes, then throwing her arms around my neck and burrowing, as if she couldn’t get close enough.  She knows exactly when to do it, and it melts me.  This determined, stroppy little bundle has me completely sussed.  Maybe it’s a daughter thing, a second sibling thing, or just her, but Girl sees right through me with a startling clarity.  And the fantastic thing is that she still loves me anyway.
Daunted as I was by the prospect of having a girl, it’s been a wonderful surprise to find out that while the relationship I have with her is entirely different to the one I have with my son it’s equally exciting, fun and fulfilling.
A lot more bloody challenging, mind you.
---------------------------------------------------
* I imagine. Obviously I haven’t done this.  I may be stupid enough to have two children but I’m not that stupid.
family guest post holiday guest post parenting