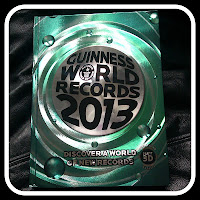 I am from a certain era where hearing a very special theme tune meant that I could watch crazy people trying to be the shortest, the tallest the strongest, the fastest... anything to appear in the book that everyone wanted for Christmas - The Guinness World Records book.  So imagine my delight when I was invited to attend a special event to introduce the 2013 Guinness World Records book (and some of its new and unique features) down in London.

But the most important part of the day was the invitation to try and be an official World Record holder.  As I was introduced to one-handed cup stacking, I closed my eyes, channeled Roy Castle and Norris McWhirter and sang "...dedication's what you need..." softly to myself.  It paid off because I was the fastest cup stacker in the Westfield Stratford during the practice sessions (17 seconds).

As I looked around at all the other record breaking attempts (sock balling, domino stacking, identifying sound effects), it was clear to see that this wasn't about the kids.  Oh no... the triumphant cries of, "GET IN..." and "NOOOOO THEY FELL DOWN" and "WHAT'S MY TIME.... AARRGGHH I was faster last time... TRY AGAIN!" were coming from the adults.  And we all agreed that it was character building and a good lesson for the children that you can't win every time.  *cough* 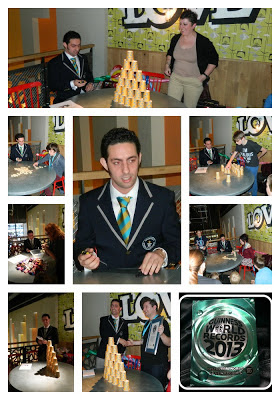 But then the official adjudicator arrived we all calmed down a little bit.  The three fastest domino stackers (Adam, Charlie and Kelly), the three fastest sock ballers (Clare, Michelle and Kate) and the five fastest cup stackers (Laura, Paul, Kelly, Jake and yours truly) were invited to officially try for a world record.  You could smell the competitiveness as we had all beaten, or been close to beating, the official records during our practice sessions.

As you can see by the photos we had an official record breaker amongst us - the one-handed cup stacking record currently stands at 16 seconds now.  Congrats to Paul!

Massive thanks to Guinness World Records for a fantastic, fun-filled day.  The person creating balloon models and the face painter were both hugely talented and kept the younger children really well occupied.  We were all treated like VIP's for the day which is a very special experience in itself.

Don't forget that the 2013 book makes a fantastic present and might give you some record breaking ideas.  I know that I've got my Boxing Day games sorted now - I'm determined to be the best at cup stacking somewhere!

PS. You can see some extra pictures over on my Facebook page.