The Breakfast Club - One Year On 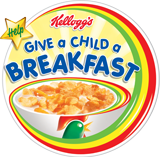 In October of last year I wrote a post - ingeniously entitled The Breakfast Club, because no-one had ever thought of that before... - which championed breakfast clubs in schools.  In summary, I supported the breakfast club campaign for primary schools but wished there was a way to get them up and running in high schools where I think they are needed just as much as in primary schools.

Sadly, 40% of breakfast clubs have closed in schools across England and, according to a report released by Kellogg's, 79% of teachers surveyed have revealed that children are still hungry in morning lessons and the problem is getting worse.  There are many reasons for this including financial distress, time constraints and that some parents leave their children to fend for themselves in the mornings.  Going without food in the mornings has a direct impact on children's behaviour and concentration in lessons, making them less likely to reach their full potential at school.

In response, Kellogg's has re-launched their nationwide campaign to "Help Give A Child A Breakfast".  They are committed to providing three million breakfasts over the next three years through their partnership with food charities such as FareShare.  They aim to support the most vulnerable people in the community.

In 2011 more than 500 schools received a grant of £450 to start a breakfast club.  This year the applications have reopened and schools with existing breakfast clubs can apply for a grant of £450 plus £50 in Kellogg's vouchers.  Your school can apply on the Give A Child A Breakfast website - Breakfast Club Funding page - and the closing date is January 31st 2013 so you have plenty of time.

I'll close with the exact same paragraph as last time.  It is up to us to make the difference and the changes.  We need to give our children the right message about healthy eating so that it become s second nature and so that they pass on the right message to the next generation.  We also need to ensure that poverty isn't a barrier to health and success.

I am a member of the Netmums Blogging Network, a unique community of parent bloggers from around the UK who have been handpicked by the Netmums team to review products and brands on their behalf.  I have been paid expenses for this post but retain all editorial conrol.  All my Netmums reviews will display the Netmums logo within the post
breakfast breakfast club diet healthy eating kelloggs netmums