Dating In The Dark : The Andrew Stone episode

August 10, 2010
I have been waiting for this all week and was unsure whether to post this here or on the Starman Fan Club.  It may appear in both places.  Anyway - play nice - we are all entitled to our own opinions.


The tagline for this episode was:
Two Guys, Three Girls and Andrew Stone.
I have a feeling that Andrew may have encouraged that subtitle as it encompasses everything that he promotes about himself.  He explains to camera that he understands why Robbie Williams has never found love (even though Mr W got married just this week to his girlfriend of over three years...).  All the time the backing track is "Filthy Gorgous" by the Scissor Sisters - a band that Andrew admires and emulates with his own band, Starman.

The structure of Dating In The Dark remains unchanged so the first meeting of all the guys and all the girls in the same room together is, unsurprisingly, in the dark.  Cameras are positioned around the room with 'night vision' but the participants cannot see anything at all.  Informal "bar chat" takes place and someone poses a question about dating celebrities.  One of the girls says that she believes that the celebrity on screen is not usually the same as the celebrity off screen.  Andrew is seen nodding to himself, pleased with that analogy.

The dating starts and the participants only have the informal chat as first impressions.
Vicki chooses to 'date' Andrew first.
Shot to camera:  Andew says "I'm a people person.  I bounce off people like a billiard table".
After the date, Vicki says that she would like to date Andrew again

A few other dates take place.  If you've never seen it before then the only way I can explain Dating In The Dark is that it is like a pre-watershed version of a swingers party.  In the dark.  This supposedly takes away the element of prejudice.

Next a Compatibility Test takes place - all computerised and hi-tech.
Andrew is matched with Vicki at 72% with their most compatible traits being reliability, vanity and open-mindedness.
Andrew explains (to camera again) that he is so deep and that you can't just be a glamour model (as Vicki has  already confessed that she is one) to be compatible with him.
Andrew cartwheels down the corridor as he goes to the 'date'.
Andrew speaks to camera once more: "When the Stone-Zone is in the room you are going to dance.  I'm going to make you dance"
Cut to shot of Andrew making Vicki-with-the-big-tits dance but, to be fair, she appears to be enjoying it and joining in rather enthusiastically.

It is at this moment I question why no-one has realised who he is.  Do these people not watch television?  How has the genius that is 'Pineapple Dance Studios' passed them by?

Andrew tries to guess Vicki's weight by suggesting that she is above 8 stone but less than 9-and-a-half stone.
Vicki is visibly offended by this and decides that she doesn't want to see him again.

At some point around here is some footage showing the other couples.  I'm not sure what happens here as I have gone to make a brew.

The opening shot after the ad-break is of Andrew stretching because he doesn't want to pull anything if things get frisky (too much innuendo, too little time).
The other male participants (oh yes, their names are Paul and Justin) ask him what he is doing.  I'm sure we are to believe that this is not a set up as Andrew is currently sat in splits.  He turns onto his back, holds his feet in the air and asks Justin to stretch his legs back into splits mode.  There is far too much orgasmic groaning from Andrew for me to feel comfortable in my own home now so I watch the next bit from behind the cushion.  He is now leaning on a windowsill or something holding his right leg up by his right ear, trying to get the other lads to join in, making some grinding movements.
It is a real shame that you cannot un-see things. 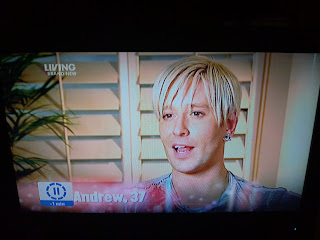 Shot to camera with Andrew talking about being a team player.
The caption underneath says: "Andrew, 37"
I am going to have to contact Living TV as I am sure they have this information wrong.  Andrew told us on 'Pineapple Dance Studios' earlier this year that he was 28 years old.  I hope he gets an apology from Living TV.

Now it is time for a final date.  There have been three opportunities to request dates in Wife Swap Dating In The Dark and next to go on a final date is Andrew Stone.  No-one has asked Andrew on a final date but he has requested a date with Natalie.
She is intrigued by Andrew.
Andrew says (to camera) that he has a natural gift to help people open up and [..] to be free and encourage them to try new things.  He wants to paint her face.
Then he asks her for a kiss...
He says kiss was really good
She says it was really short

Some of the other couples swap again date each other *yawn*

Now is the first time the daters can see each other in the light.  For those not familar with the format of the show, each particpant can request to see one person in the light.  Both start off in a dark room, the light shines on each person in turn and they cannot see the other persons reaction.  No-one is allowed to speak or show emotion.

I wonder what Andrew's reaction to this part of the show is?  Oh, don't worry - he shares his thoughts with the camera again:
"Now they are going to see they've been dating the A-Bomb... the A-Unit... the Starman."

Andrew wants to see Natalie first.
Natalie is still deluded drawn to him so does want to see what he looks like.
Andrew sees Natalie and nods approvingly.
Natalie sees Andrew and appears to be disappointed and confused.
She says to the other girls in the room afterwards that she's sure she recognises him but she's unsure from where.

By this point I'm convinced that Andrew isn't going to get an "after show" date as when Vicky saw Justin she was very excited about his looks and when Natalie saw Paul she was almost dancing.  That only leaves Maria (sorry, she hasn't had a mention yet - she was very beige) who wants to see Paul.
Oohhh, what's going to happen?

In the final segment each participant has to decide whether they want to meet up with one of the other desperado's participants.  They send out invites and either wait in a room to see if someone turns up to take them on a real date or they walk out or they stand their date up.

Vicky WLTM (would like to meet - hey, get me) Justin and he is given the decision of whether to go to her room or walk out.  He decides to meet her and they walk out hand-in-hand!

Andrew doesn't know whether to meet Natalie or just to walk out.  He imparts this wisdom: scientifically you look for someone who looks like yourself so, with that logic, he as decided not to date Natalie.  He has loved Dating In The Dark because people judged him for who he is rather than his celebrity status and he will miss that.  His final words of wisdom are:
"There's always more fish in the pond - you just have to keep casting your rod."

And just so you know what happens to the other contestants:
Natalie wanted to meet Paul.
Paul liked Natalie for her personality.
Paul preferred Maria's looks.
Natalie and Maria waited in separate rooms to see who Paul would choose.
Paul chose neither and walked out alone.