February 08, 2011
The Daily Express (amongst other publications) reports that:

A MOTHER who left her son of 14 to mind his three-year-old brother while she went to the shops was given a police caution for “cruelty” and was suspended from work.

Last night the case ignited a debate over when it is acceptable for parents to briefly leave older siblings home alone as carers.

(source: Daily Express, 07.02.11)
Before I even offer my opinion on the very nature of this subject, please have a read of the full article and make an informed decision about what was going on (the link will open in a new tab/window).

How much information is missing?  If every parent who "nipped to the shops" was arrested and cautioned, how much police time do you think this would take up?  On what grounds did the police consider that this mother was guilty of cruelty?  Was it really 30 minutes or had it been a few hours?  Was this a nosy neighbour sticking their beak in or had there been a number of reported incidents leading up to this arrest and conviction?

The NSPCC advises that, whilst parents can be be prosecuted for neglect if they leave their child in a situation that leaves them at risk of injury or suffering, there is no legal age at which children may be left alone.  For the lack of that law alone, I am glad.  Each child is different and their responsibility should be merited individually.

Siobhan Freegard (co-founder of Netmums):
"Parents are left to rely on their own judgment but sometimes they will make the wrong call."
Consultant psychologist David Spellman:
"Fourteen-year-olds are very different from one another."
My own methods of parenting are probably not the best benchmark but I have used babysitters who have been around 14 years of age.  I regularly babysat for my younger sister and my younger cousins from a similar age.  We laid down the ground rules, always made sure the sitters knew where we were going and that we were contactable, even in the days before everyone and their dog had a mobile phone. I phoned in a couple of times during the evening to make sure everything was all right.  Through trial and error we weeded out the bad and kept the good.  Two of our best babysitters were lads and I would have entrusted my children's lives with them in a heartbeat.  They remain close friends to this day and now have families of their own.

I started to leave my own daughter "in charge" when she was about 13 years old - her two brothers were 11 and 5 at the time.  Not for very long and, again, the same rules were in place, with some additions.  It doesn't matter what they were - my rules wouldn't work for your family and visa versa.  Maybe I have been lucky that any babysitter and all of my children respect my rules. 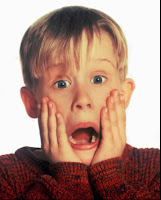 And what about "latchkey" kids?  Without bragging - and due to circumstances that I woudn't wish on anyone - we were in the fortunate position for there to be one parent at home and one at work whilst my children were at primary school.  HimUpNorth comments that his own son was given responsibility to walk home from (primary) school last year, arriving home before anyone else, therefore was entrusted with his own house key.  Our own eleven-year old was given the same responsibility last year but always had someone waiting at home.  During the summer holidays we had the Grand Ceremony of the Keys when I took him out to have his own front door key cut and the full on lecture about how much a change of locks cost if he lost the bloody thing.  We considered it a necessary move now that he was attending high school.  Occasionally he has to let himself in to an empty house and knows that the responsibility of being alone at home is not to be abused.  According to the guidelines set out he can be entrusted to walk the 1.5 mile journey home but not to let himself into his own house.  My own husband regularly laments about the days he and his brother came home from school to an empty house and started preparing the tea ready for his mum to cook when she came home from work.

Of course, the media highlights extreme cases but it gives us the opportunity to examine what we do in our own lives.  What are your thoughts?