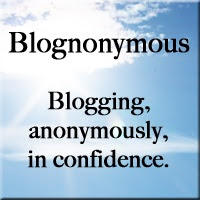 Editors note: This post was submitted to me within the ethos of Blognonymous.  The writer will explain who she is and her reasons for requesting that she post this here, semi-anonymously.  Please feel free to offer her your advice and thoughts in the comments section.
oOoOoOoOoOoOo
I am not writing this post here because I want to be anonymous. I am writing it because I don't want it on my own blog. Because some of the relevant parties read my blog. You know me as The Moiderer and sorry for the long post.
I did not have an easy childhood. You can pretty much write off the first 18 years of my life and I nearly did that myself. In the end I went to University and reinvented myself since then.
When I was 3 or so, my mother went into hospital. The pressure of 2 pregnancies (my brother and then I) had eventually shown that she had been born with a form of Spinabifida that meant part of her spine was actually missing. She spent a long time in hospital, and as the story goes, my father moved in a friend of theirs and started a relationship with her. When my mother got out, she found she had no home to come back to as my father had kicked her out.
The woman became my stepmother. She didn't like us. Maybe we reminded her of my mother or something. I later found out that she had an alcohol problem. She used to have a fiery temper and my brother and I lived in fear of us hitting us which she did pretty regularly at any excuse. A stain on the clothes, not finishing our food, whatever. I tried really hard to keep quiet and stay out of the way but it was impossible. Add to that the fact that we really weren't fed well and were generally almost skeletal, life wasn't much fun. We used to sit inside or outside, and not move or ask for anything. We would not dare ask for a drink  or anything.
What role did my father play in this? well, nothing. He did nothing. He did not step in to stop it and he did not contribute to it.
When we I was about 7 a couple of things happened. My stepmother had a little baby girl and shortly after a social worker visited. My mother had met a new man and had been fighting for custody of my brother and I apparently. For some reason my father was resisting. We had been coached to tell them that all was well and we were terrified to not do as we were told.
However, apparently I am not so easily controlled, and towards the end of the interview after "towing the party line" all the way through I spoke up. I said I wanted to go and live with my mother.
Luckily it didn't have repercussions. In fact, in a rare moment my father sat me on his lap and asked why I did it? I can't even remember what I answered but he put me down and told me he was disappointed in me.
In time we went on holiday with my mother and her new man and they informed us that they wouldn't be sending us back again. I don't know the technicalities of the situation but from then on we lived with my mother and stepfather. Things just got worse then but that is a whole other story.
I ended up moving back and living within a few minutes of my father. I tried to visit but he didn't want anything to do with me. My brother, on the other hand, visited a few times and was welcomed openly. In later years my father visited him in London and helped him out.
My half-sister never knew we existed. When she was 17 a school friend asked how her brother and sister were (we went to the same schools) and she went home to talk to my/our father about it. He fessed up and when she was 18 she wrote to me. She had a very different life to me but having been brought up as an only child was gutted to find out she did in fact have siblings. We get on fine now and I actually feel quite sorry for her.
So why am I writing this stupidly long post?
Well my father connected to me on Facebook about a year ago at the suggestion of my sister. He still didn't speak to me.
Then this week my father changed my friend status to "daughter". After a pause I accepted. He then launched into a FB chat, thanking me for "accepting him" and going on about the hole in his life without our family in it. He talked about the pain in his heart and the tears in his eyes and how he did not have the courage to approach me until now. Apparently he has got the spiritual bug really badly. In fact he now runs some weird crystal healing practice - ironic!
I don't know what to do. In comparison to my stepfather he is a great father. I feel like I need closure but I don't buy this pain thing etc. it's only cos he has a new girlfriend!
My hubby hates him. He wants to punch him to be honest. At the same time, he knows I need closure so will fully support whatever I do.
I haven't responded to him yet. I am still trying to give him a chance to put a little more of himself on the line.
I can't look at this objectively. It throws me into turmoil and depression when I see him even log on to Facebook.
Thanks for listening.
blognonymous emotions family