My name is @NICKIE72 and I'm a Twitterholic 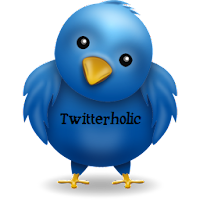 We're having a meme-tastic time on the blog at the moment but this is one that I knew I was going to enjoy  It gives me an opportunity to talk about my favourite subjects: Me and Twitter.  This is a fairly new meme, started by Kate at The Five F's and, as usual, there are a few questions to answer but I think I've probably gone off at a bit of a tangent...

According to Bwitterday I joined Twitter on the 28th of November 2008.  It was because it was mentioned on a parenting forum so I had to have a nosy.  I joined but didn't do anything (a) because I didn't understand it and (b) the live Twitterstream included everybody back then.  Then there was a slight adjustment so if you followed someone, you saw their tweets and all the tweets of the people that followed them.  With respect, I could understand it when Twitter became more popular and the powers-that-be decided to change their feed settings and allow only updates from the people you follow.  I have to say though, in the early days, some of the people I follow now came from the "everybody who tweets" live feed.  You can still access the live feed through certain applications - one being TwitterGadget for the iGoogle desktop.


Who is/was your oldest follower?  Who did you follow first?

I checked for this information through FirstFiveFollowers and found that the first person to follow me was @skullncrossbuns.  We still follow each other now and she tweets every day.  She is a very talented rubber stamp carver.

The first five people i followed were:


all of whom are still tweeting now.  I pick quality tweeters *wink*


Do you have any celebrities following you, or have you ever had a DM from a celeb?

Well, I *know* that Stephen Fry was talking to me during this exchange, even though he didn't actually mention me by name:

But my ultimate twitter moment has to be, pre-#FridayTwiz days, when I started a hashtag game one night and Phil Jupitus replied with this: 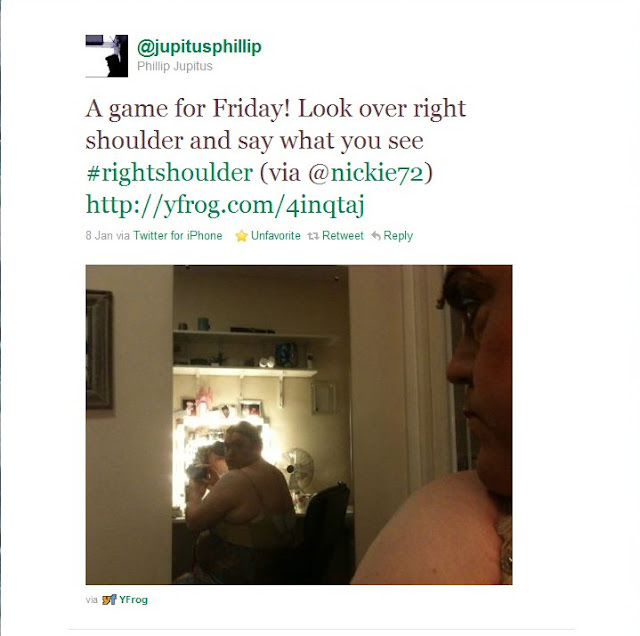 which spawned #rightshoulder tweets, retweets and pictures from all over the world, thanks to Phil's photo.  He was appearing as Edna in the stage version of Hairspray and was in his dressing room getting ready for that evenings show.

Oh, and there's my exchange with Sarah Brown during the evening of the day I met Jack Straw, the time I was told to "piss off" by the Tree of Temptation during Big Brother 11, the lovely weekly #ff mentions from X-Factor's Rowetta and the Sunday Mirror's TV columnist, Kevin O'Sullivan, the "Really?  You know Bernard?  Did you buy a carpet from him?" tweets from Dave "Come Dine With Me" Lamb whilst discussing the best ever group of diners (I chose the Preston group) and I the time I gave Russell Grant instructions on how to put a poppy twibbon on his avatar after he asked where mine came from.  And many, many more, but I don't like to talk about it...

Half of my problem (is social engagement a problem?) is that I forget I am speaking to "celebrities" and just start a conversation with whatever tweets pop up in my timeline.  It is only afterwards, when I realise that I have been talking to someone famous that I, unashamedly, mark those tweets as "favourite".  I knew there'd be a reason for it one day.


If you could follow anyone not on Twitter - alive, dead, real or fictional - who would it be?

Because Twitter is a current vogue I think that you have to take the users as they come and go.  If they are not using Twitter then neither myself or they are missing anything but for a shallow voyeur like myself it is a great source of entertainment.  I cannot think of one single person that  I feel is 'missing out' because they don't use Twitter.  To me, Twitter is like a massive version of MSN.   On speed!

Related posts:
All Typecast posts that mention Twitter
Especially this one - How many Twitterers does it take to change a light bulb?
celebrity meme phil jupitus philip schofield stephen fry twitter