October 08, 2010
When I took Jake out of school back in July for our family holiday, he missed his last week ever of primary school - and his presentation day.  A couple of weeks ago, I received a phone call from his old headmaster inviting him into a Friday assembly to receive his awards.  He had already cleared it with the Year 7 (high school) Head of Year and thought it would be a great opportunity for Jake.  I agreed. 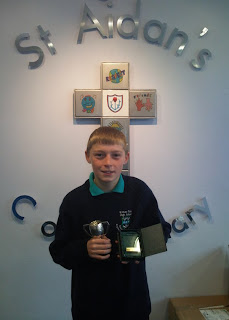 We had no idea which awards he had won but today he received the Howard Cup for Achievement which is given to only one person in Year 6 for being an all-round, personable student and he received Sportsperson of the Year 2009-2010 - an engraved glass trophy.   He also received two books (Children's British History Encyclopedia and The Lion Graphic Bible) as a Leavers gift from the school. 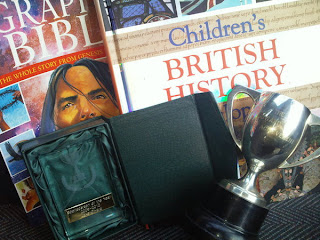 To me, the awards represent the massive effort Jake has made with the control of his ADHD and his enjoyment of sports in general.  He stood proud at the front of his old school hall today, beaming with pride.  And I was at the back with something in my eye...