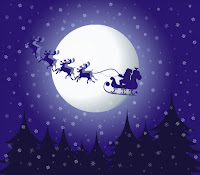 I had left home earlier in the year, an angry eighteen year old who knew it all.  I returned a more subdued, pregnant eighteen year old who now lived with her boyfriend.  My mum had stated quite clearly that my boyfriend was welcome to stay over at the house but we would not be sleeping together.  My argument?


"Why not? He can't exactly get me pregnant again, can he?"


She relented and we ended up with two camp beds in the den downstairs.

As we prepared to go to bed, my mum sidled up to my boyfriend and passed him a Christmas stocking, packed to the brim with presents.  It was my actual childhood stocking that I'd had every year for the past eighteen years; falling apart at the seams, new ribbon on the top, a few holes in the side.  Without looking at me, she said, "This is for Nicola.  Do NOT let her open it until the morning."  With an odd sort of glance in my direction, she said goodnight to us both and went off too bed.

I had never seen that look on my mum's face and whilst slightly confused, I didn't really give it much thought.  I now know what it is because that look has been on my face recently.  It is when you realise that your little girl - your first born - is no longer a child, but now an adult.

We settled down on the most uncomfortable camp beds known to man and tried to get some sleep.  Approximately four times in the night, I was awoken the mumbled cursing of a six foot three bloke, folded up in a collapsed camp bed that he was too heavy for was far too small for him!  At about five o'clock in the morning he gave in, nudged me and said "Nic, HE'S BEEN! You can open your stocking!"

I think my first words on that Christmas morning may not have been quite so festive.
christmas family nostalgia