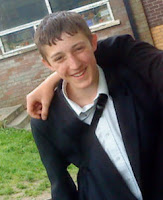 Last week an envelope dropped onto the doormat addressed to Michael (son #1).  The envelope was embelished with the NHS logo and my first thought was "junk mail".  He is 17 now, at college, has his own bank account and pays his own mobile phone contract.  He is just about the right age to start getting his own crap in envelopes.
How wrong was I?

It was his very own donor card.  He had ticked all the right (in my opinion) boxes when he applied for his provisional driving licence in September.  His view appears to be the same as mine - when I'm dead they can take what they want as it's no bloody use to me!
I am extremely proud of him for making this decision on his own.  It means so much more than me telling him to do it.
family health nhs organ donation parent blogging